Some of the biggest applause of the evening at the annual Colorado Ski & Snowboard Museum Hall of Fame induction dinner in Vail on Saturday came when the revived Winter Park Express ski train was mentioned. The speeches of inductees such as Aldo Radamus and Todd Lodwick were on-point and emotional, but nothing gets a ski crowd going like transportation issues. 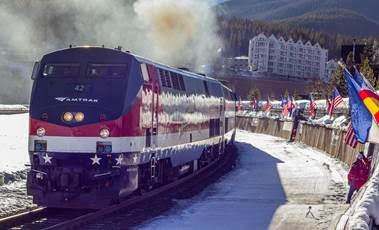 Along with the new snow this week in Colorado’s high country that’s allowing resorts to crank up snow guns for the 2016-17 season came the first road closures of the fall and the inevitable discussion of the weather-induced traffic headaches that plague Interstate 70. Increasingly, public transportation solutions are piquing the interest of snow riders sick of massive gridlock brought on by crashes along the key route between Denver and Colorado’s ski resorts.

The Colorado Department of Transportation’s popular Bustang program and now the Winter Park Express ski train are a couple of ways to leave the car at home and hopefully avoid one of those five-hour parking lots between Denver and your favorite ski area.

As the ski industry lobbyist group Colorado Ski Country USA noted in a recent press release, “The ski train, long a staple of skiing in Colorado, returns Saturday January 7, 2016 and continues every weekend and holiday Monday through Sunday, March 26, 2017. Coupled with the new commuter train running from Denver International Airport (DEN) to Union Station in downtown Denver, where the Winter Park Express departs, visiting skiers and riders can get to Winter Park without renting or even getting into a car during their stay. 3,300 tickets were sold in the first 24 hours and can be purchased at winterparkresort.com with one way adult tickets starting at $39.”

Funding and safety issues along I-70 have become a subject of heated political debate in the Colorado Legislature, where many Democrats are pushing for a more permanent funding source for maintaining and improving roads across the state, but particularly I-70 into the mountains.

In the state Senate District 8 race, Republican Randy Baumgardner, who chairs the Senate Transportation Committee, has been accused of ignoring the need for better traction laws along I-70 and playing politics with the state’s inadequate transportation budget. His Democratic opponent, Emily Tracy of Breckenridge, also called out Baumgardner for playing fast and loose with state funds when he was a CDOT employee.

Tracy would like to see an increase in the state’s gasoline tax, which hasn’t gone up since the early 90s, in order to fund transportation solutions. Such an increase would have to go to the voters and is not on the ballot next month. Studies of possible high-speed rail into the mountains have come back with multi-billion-dollar price tags.

But polls should be taken when I-70 shuts down, frequently turning the 100-mile trip into a three or four-hour nightmare. It’s to the point where frustrated travelers along the I-70 corridor that connects Denver to most of the state’s most popular ski areas are beginning to support and even advocate for increased public transit in the mountains.

The Vail Daily last week featured a proposal for a commuter and tourist train route from Salida to Gypsum on the dormant rail line that runs through Eagle County. Owned by Union Pacific, there’s an unused rail line that passes through Salida and Leadville and up and over Tennessee Pass, then down through Minturn and along the Eagle River until it connects with an active line at Dotsero and continues through Glenwood Canyon and on west to Utah.

The line through Eagle County hasn’t been used for 20 years and at one point was considered a prime trail route that was ripe for abandonment, but the federal government put a stop to that and now UP says it has no plans to either use the route or sell it. Many homes have been built along the tracks and it would likely be a shock to a lot of those homeowners if regular freight or even commuter trains started running again.

But the concept of a Euro-style ski train network has more and more appeal every ski season as Colorado’s population grows along with demand for access to the mountains. But those European trains are heavily subsidized by gas taxes, and that’s something car-crazed Americans have yet to support.

Still, skiing and rail service go back to the 1930s in the United States, and there are tracks between Denver and Lake Tahoe that pass right through Salt Lake City, traversing some of the best skiing in the world. This is from a 2008 article by Eagle County resident Scott Willoughby that ran in the Denver Post, an article entitled “Riding the rails to the slopes”:

“From a historical perspective, however, an even better case could be made by Sun Valley, Idaho, where the first destination winter resort in the nation was developed by W. Averell Harriman, former chairman of the Union Pacific Railroad, in an effort to increase the number of riders on passenger trains.”

So the UP in the past really founded the idea of U.S. ski trains. The Salida-to-Gypsum connector route on existing but dormant tracks would pass close to Monarch and Ski Cooper ski areas and then hook up at Dotsero to that active route from Denver and on to Salt Lake City and Lake Tahoe.

The Salida-to-Gypsum line would also pass very close to Vail and could stop within steps of an existing gondola in Avon that heads up to Beaver Creek. A gondola in Minturn up the back side of Vail Mountain could complete the connection to Vail, and the Salida-to-Gypsum line also goes right by Eagle County Regional Airport before heading into Glenwood Canyon, so there’s a regional air connection as well.

Ironically, the rail route from Pueblo up and over Tennessee Pass was pushed through primarily to connect to the mines of Aspen, but the state’s most famous ski area is no longer connected by a rail route. The line between Aspen and Glenwood was converted to a trail system. Still, Glenwood has Ski Sunlight and its own attractions in the form of its famous hot spring, and Aspen is a quick Uber ride away from Glenwood.

One can imagine skiers enjoying a bottle of wine in the bar car, a good meal in the dining car, resting from a long day on the slopes in a sleeper car and traveling between Winter Park, Beaver Creek and Glenwood, then heading on to Salt Lake City, where so many ski areas are just a short shuttle ride away.

Would tourists pay a premium for that kind of a ski train experience? Could ski resort workers ride the rails on some kind of discounted commuter pass? Would the UP ever sell those tracks between Gypsum and Salida? There are far more questions than answers when it comes to a more robust ski train concept in Colorado that goes beyond just Winter Park. But there seems to be growing interest in that concept.