Vail has a car problem, not a parking problem 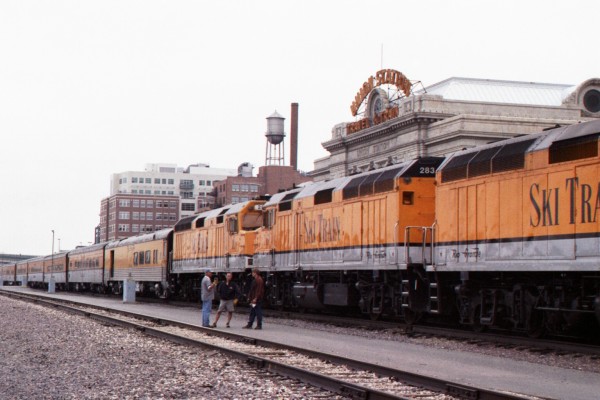 As I read the news Thursday of the return of the ski train between Denver and Winter Park, it got me to thinking about our parking problem here in Vail. Specifically, is it really a parking problem — one that by the way signals the runaway success of a business — or is it more of a car problem?

And do you solve a car problem by slapping up more concrete in the form of very expensive and very ugly parking structures, which in the rest of the country are incidentally called parking garages? I don’t think so, and clearly neither did the majority of the Vail Town Council.

It’s the old “Do you build the church for Easter Sunday? debate” that we’ve been having here for decades, or at least since I got to town in 1991, and it’s the same argument that rages around Interstate 70.

Would you just keep adding lanes to accommodate Friday and Sunday afternoon traffic volume in the winter, even if you physically and financially could? Fact is, it’s impossible to six, seven or eight-lane I-70 through narrow canyons and in the midst of mountain towns bisected by the highway. And most of the time you don’t need that much traffic capacity anyway.

But that weekend gridlock on I-70 costs millions of dollars in lost productivity, lost travel time and potentially lost tourism as snow riders figure out it’s a lot easier to get to the slopes from the Salt Lake City airport than it is from Denver International.

So far it hasn’t hurt us too much as Colorado remains a more popular ski destination by a three-to-one margin over Utah, but over time, travel and parking woes could wind up costing Colorado ski resorts – particularly the ones along the I-70 corridor.

It’s interesting to note that the revived Amtrak Winter Park Express rail service probably would not have happened without a $1.5 million grant from the Colorado Department of Transportation, which knows it has to do all it can to get people out of their cars on busy ski weekends. And while it’s heavily subsidized, CDOT’s Bustang bus service also has been a runaway success.

These are visionary innovations that really aren’t that visionary. It’s just a matter of convincing snow riders to leave their rolling ski lockers at home and take public transportation to the slopes. The Europeans have been doing it virtually since the birth of alpine skiing in the Arlberg.

The ski train to Winter Park is the only one in the nation. I know because I’ve ridden it. And it’s a shame it’s the exception and not the rule. We are a car-centric society, and it hurts us competitively as ski resort communities in the central Rockies of Colorado.

Even Canada, a nation far more Euro in its thinking on topics such as health care, has consumed the car Kool-Aid when it comes to traveling to its mountain resorts.

I wrote about the transportation woes when I worked at the Vancouver 2010 Winter Olympics, where Whistler and Vancouver might as well have been in two different countries and organizers inexplicably shut down their ski train before the Games. That was not visionary, especially for what was billed as the Green Games.

Vail used to be visionary. It took a lot of vision to build a Tyrolean village in a sheep pasture to begin with. Then when I first moved to town Vail put in one of the first traffic roundabouts in the state. Despite the grousing of ski filmmaker Warren Miller, roundabouts are now everywhere.

Clearly a little more vision is necessary to position Vail for success over the next 50 years. The vision to figure how to shuttle workers — especially construction workers — into town from outlying lots so that they don’t take spaces that should be dedicated to paying customers. That would be a good start.

The vision to perhaps develop commuter rail to our own underutilized regional airport in Gypsum, which happens to have a dormant rail line running all the way through Dowd Junction to Minturn and eventually the Front Range. The tracks have not been abandoned, but they are dormant, and it would take visionary negotiation with the railroad to use them for passengers.

The vision to consider gondolas and chairlifts as modes of transportation. Vail’s founders one day hoped to connect Vail and Beaver Creek with lifts, the way many European resorts are interconnected – sometimes with a single lift serving one small town. Part of that vision was realized with the ski village and lift connection of Arrowhead to Beaver Creek and Avon.

Minturn is an old railroad town with rail yards perfect for parking cars and an established ski route called the Minturn Mile. Imagine a chairlift connection to such parking and housing possibilities. Similarly, Meadow Mountain could connect to Minturn and in turn to Beaver Creek, which could also connect to Eagle-Vail.

Vail Resorts would have to be a catalyst for such innovation, but there is recent precedent with the ski company’s visionary gondola connection between Park City and the Canyons forming the largest ski area in the United States and possibly launching that state’s Era of the Interconnect.

All of these things would require jumping through possibly insurmountable regulatory hurdles, raising trainloads of cash through public-private partnerships, convincing environmentalists and NIMBY’s alike that getting cars off the road is a good thing, and ultimately it would require a healthy dose of something we seem to be lacking as a community and a nation in recent years: Vision.