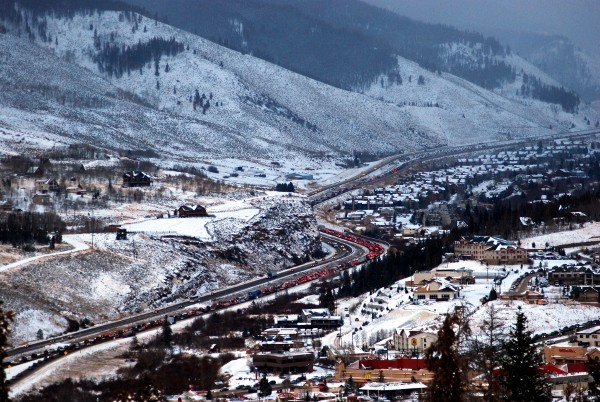 Interstate 70 traffic snarls in the winter.

For an obscure rural district encompassing the vast northwestern corner of Colorado, state Senate District 8 has certainly seen its share of nasty politics over the past four years. Look for that to continue this election season with fresh attacks on incumbent state Sen. Randy Baumgardner.

The Hot Sulphur Springs Republican is facing Breckenridge Democrat Emily Tracy in the Nov. 8 general election, and there is clearly no love lost between the two candidates who also squared off last time the SD8 seat was up for grabs in 2012.

In a recent interview with the Rocky Mountain Post, Tracy accused Baumgardner of ignoring constituents, violating the public trust and playing politics over critical economic and safety issues such as highway funding. She was particularly pointed over revelations the senator may have use state property for personal gain while working for the highway department.

“It’s a violation of public trust,” Tracy said. “It’s public money. It’s taxpayer’s hard-earned money that goes to funding all of this. It just shouldn’t be misused.”

The Rocky Mountain Post obtained the results of a Colorado Open Records Act request filed with the Colorado Department of Transportation last spring revealing that Randy and Lori Baumgardner were involved in three different incidents of personal use of state property.

Randy Baumgardner worked for the state highway department for 11 years starting in 2000, and his wife Lori still works for CDOT. Lori Baumgardner received multiple Performance Documentation Forms for incidents that also involved her husband, including the improper use of a fuel card PIN number in 2009, using CDOT sand on their ranch in 2014, and earlier this year using CDOT office photocopy machines to duplicate their tax returns.

“I don’t know anything about any of that,” Randy Baumgardner told the Rocky Mountain Post. “I’m not addressing any of that. Like I said, you can make out of that whatever you want to. I don’t know. I’ve not worked for them since 2011. [Lori] still works for them. I’m not going to get into the weeds on that.”

CDOT officials would not comment on the CORA findings, citing personnel reasons, but officials did verify the results of the records request, which included emails (baumgardner-cora-copies pdf) from supervisors who were very concerned about the misuse of state property by the Baumgardners. And documents obtained in the CORA request also show the senator does know about the incidents in question: baumgardner-sand-release-april-2015 (pdf).

Tracy, who served eight years as an elected Cañon City council member, also previously worked for a police department and the state judicial branch for four years as a program administrator in the office of dispute resolution.

“I take very seriously that requirement that you not use public resources for your own personal benefit,” Tracy said. “I’ve always worked under those kinds of rules wherever I’ve worked, and I’ve always adhered to those kinds of rules, so it would be very concerning to me to see anyone not follow those rules.”

Baumgardner dismissed the CDOT revelations as election-year politics, denying he’s ever improperly used state resources for his own personal benefit.

The largely conservative district could prove pivotal as Democrats try to wrest away control of the state Senate, which Republicans held by a scant 18-17 margin last legislative session, allowing the GOP to thwart the Democratic agenda on numerous fronts. Dems controlled the state House 34-31 and appear poised to maintain that majority in the next session.

That makes Senate control all the more critical given Democratic Gov. John Hickenlooper is in office for two more years and has denied rumored Clinton administration overtures. 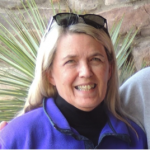 An educator and longtime civil servant, Tracy also has the backing of two Republicans who used to hold the SD8 seat — Hayden GOP members Al and Jean White. The Whites endured a nasty 2012 primary with Baumgardner that saw Jean White attacked by fliers accusing her of pursuing a “homosexual agenda” for her vote in favor of civil unions.

Jean White was appointed to the SD8 seat by a Republican vacancy committee after Al White, who was elected to the seat in 2008, was appointed by Hickenlooper to direct the Colorado Tourism Office in 2011. Al White ran as an unaffiliated candidate this spring but dropped out because of fundraising difficulties and promptly endorsed Tracy.

Baumgardner also took some serious heat of his own in 2012 after allowing a sex offender to stay on his Hot Sulphur Springs ranch after the senator voted against revisions to Colorado sex-offender laws. He told the Summit Daily News he was trying to help a man get his life back on track, but in the same interview he also said, “In my realm, right’s right and wrong’s wrong.”

Tracy said she’s been hearing from voters and elected officials in Summit County and throughout the sprawling district, which also includes Jackson, Routt, Moffat, Rio Blanco, Garfield and Grand counties, that Baumgardner won’t meet with them or listen to their concerns.

“More and more people know Sen. Baumgardner just is not serving his district well,” Tracy said. “I’ve heard from people who’ve tried to meet with him; I’ve heard from local government officials in several counties that he doesn’t respond to their requests for meetings.”

Tracy is particularly critical of Baumgardner’s stint as chairman of the Senate Transportation Committee and the lack of adequate funding to maintain and upgrade Interstate 70. But Baumgardner counters he’s worked relentlessly to pass legislation allowing for highway bonds only to be blocked by House Democrats.

“Being the chair of Senate Transportation and running the bill the last two years to continue the transportation bonding that has passed out of the Senate but invariably dies in the House in State Affairs, it’s not the be all, end all, but we’re doing nothing,” Baumgardner said, alluding to a $1-billion-a-year shortfall CDOT officials say they’re facing for basic maintenance and expanding capacity. Democrats instead are focused on raising taxes to pay for deficient roads and bridges, Baumgardner added.

“We’re constantly looking for more money for education, for our roads, for corrections, for all the things that we have in the state, and the only thing that the Democrats can come up with is, ‘Oh gosh, let’s increase a fee or let’s raise taxes, and they say let’s put it on the ballot,’” Baumgardner said, noting recent education tax hike proposals have failed miserably.

But Tracy argued that Baumgardner’s bonding bills haven’t come with identified funding sources, making them fiscally irresponsible, and that the state gas tax has not been increased since the early 1990s.

She also blasts Baumgardner for killing a bipartisan traction bill last session that would have allowed CDOT to declare a chain law for passenger vehicles before driving conditions became too problematic. Baumgardner said the bill was already in state statutes and simply needs to be enforced.

Tracy pointed to support for the bill from CDOT, the Colorado Highway Patrol, local government officials such as Summit County Commissioner Dan Gibbs, the I-70 Coalition, EMT’s from Eagle County and the Colorado Motor Carrier’s Association. All of them said it would make travel on the corridor safer and easier in the winter, reducing road closures.

Perhaps his most controversial stance has been on federally-owned public lands, which Baumgardner said should at the very least be studied for possible solutions to statewide funding woes.

“Nobody’s ever said, ‘Let’s take the federal lands over,” Baumgardner said. “But we’ve said, ‘Let’s take a look and see how much revenue there actually is in the public lands, through severance tax, ad valorem federal mineral leases and through timber sales. If it’s billions of dollars, it might be something to take a more serious look at. If it’s $2 million, then let’s not waste our time.”

Tracy said that kind of talk is dangerous because it could lead to industrial development of federal lands and reduced access for outdoor recreation.

“It’s just been a surprise to me over the last several years to see this effort to turn public lands over to the states, who may in turn, for financial reasons or whatever, may turn those lands over to private interests,” Tracy said. “It’s concerning to me that Sen. Baumgardner is on that side of the issue. It just makes sense to me.”