Planned obsolescence all over the living room floor 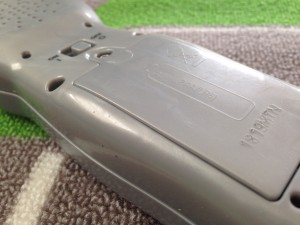 I was mischievously tempted to reveal the strategy of planned obsolescence to my two-year-old as he stared up at me with sad, confused eyes, wondering why daddy couldn’t fix his toy.

Poor kid. Not only did a favorite toy stop working this morning, but dad is also a snarky man with an over-inflated sense of his own intellect.

I spared him the details. I told him the toy – a pretend TV remote – was just as fun to use even when the buttons didn’t work. But with my eyes, I tried to say something more meaningful, like this: “Companies build these toys with a specific lifespan, son. They do this because, in the early days of the industrial revolution, companies were concerned that supply would vastly outstrip demand. To solve the problem, the National Manufacturers of America, and others, began a decades-long campaign to change the consumer culture in America. Part of that plan required that people began to see products as an extension of their identity and status. Another part involved planned obsolescence: the idea that products have a limited lifespan, die, and clear the way for more product.”

It’s hard to say that with your eyes.

Anyway I’m not sure he was picking up what I was putting down. The good news is, he accepted my argument that the toy was still fun, and is playing with it even now as I write this. Good boy. Hold off as long as you can son – eventually we all get sucked in to the cycle.

I’m actually a believer in this system. As we continue with the RockyMountainPost.com, I will be providing reviews of technology products, some of which utilize the planned obsolescence technique. The reason I’m OK with it is because I like the idea that we’re all speeding forward into the future, a future full of jet packs, cyborgs, quantum computers and whatever else you like to imagine. I like renewable tech in particular, because renewable tech seems to be the only real way we’ll get ourselves out of this whole fossil-fuel-burning mess, which was started by (old) new technologies in the first place. As we speed break-neck toward the future, we need companies and institutions to do the necessary R&D, make the products, and develop the manufacturing techniques. To do this, they must be profitable. If they must use planned obsolescence to compete, then I think it’s justified.

But it still makes me sad. Maybe even a bit hollow. Why is that? 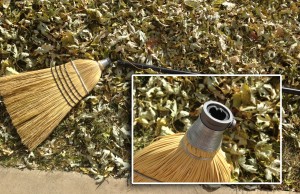 The broom in question, with a close-up in the inset. Why can’t I get a broom that lasts for years?

It can also make me mildly angry, or disappointed, like when a brand-new broom I bought (from the locally-owned hardware store) snapped at the neck as I was sweeping leaves. One single, thin staple was holding the entire broom head to brittle plastic handle. The plastic snapped in a way that no non-commercial-strength super glue could repair.

When something like this happens, which is often, I feel like a sucker. Why can’t they just make a goddamn good broom and charge me extra? Why was this broom made in a factory on the other side of the world? Why is all this happening? Who’s in charge here?

There is a loss of innocence coming for my boy, who had such a sad look in his eye when I explained to him the toy was broken, and no amount of changing the batteries would fix it. He’s already moved on to a wooden puzzle (made in the U.S.A.) and enjoying himself. My wife and I do our best to not accept plastic or electronic toys as gifts, and if we buy toys, we try to buy the same robust, locally-made toys I knew well as a child.

He likes these toys: wood blocks, his little puzzles, and even just sitting in a circle learning songs, one of the oldest and, in my opinion, most morally-unfettered forms of joy we have in this world.

But it’s impossible to be perfect in this regard. Or, rather, being perfect would make my wife and I into toy Nazis of some kind. Nowadays everything is made overseas. Ninety-percent of what’s out there has plastic in it, batteries or LEDs. We get hand-me-downs, and our boy is attracted to items that buzz or light up. He is, after all, human, and so are we.

So this lesson awaits him, somewhere in his future, when he’ll figure out that almost everything he owns is designed to break. Even stranger, that our culture will train him, in a way, to go out and buy and new one after the old one breaks. That’s how it works. That’s how the world goes round. That’s how we keep the economy pumping.

But there are consequences to this. There is waste, there is a feeling of hunger never satisfied, which isn’t all that different from the feeling one gets after eating an entire bag of potato chips… weirdly sick, still hungry for more. At home, we see it every day when my boy takes out the toys and scatters them all through the house and there they lay, little avatars of planned obsolescence, slowly dying on the livingroom floor. We just clean them up again, and the next day the cycle starts anew.

For more on the creation and consequences of living in a consumerist culture, watch the 4-part BBC documentary, “The Century of the Self,” below or on Vimeo.

Adam Curtis: The Century of the Self from therebel.org on Vimeo.