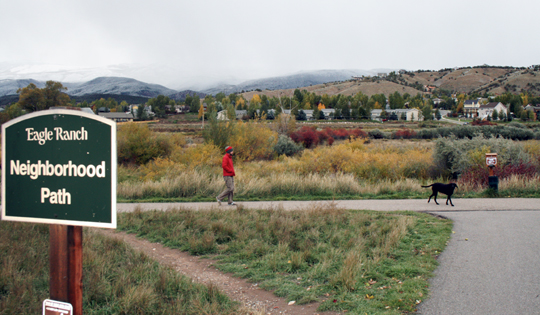 The nieghborhood path and open space in the town of Eagle, Colorado, is only one of several ‘walkable’ aspects of Eagle County. Photo by Tom Boyd.

The trend toward walkable neighborhoods seems to be gaining strength, according to a new report from the National Association of Realtors released October 31. Sixty percent of respondents to the NAR 2013 Community Preference Survey reported that they seek homes in a neighborhood with a mix of houses, stores, and businesses that are easy to walk to. This is up from 56 percent in the 2011 version of the Survey.

‘Walkability’ – a term describing a neighborhood’s walking-distance proximity to shopping, work, businesses and restaurants, among other things – is on the rise in Eagle County as well, according to local experts.

“The trend has definitely extended into Eagle County,” said Michael Slevin, President of Berkshire Hathaway HomeServices in Eagle County. “Many of our newer and proposed developments feature walking paths and neighborhoods with easy access to everything from coffee shops, restaurants and shopping to parks and playgrounds.”

Slevin said that part of the Valley’s success originated from the walkable nature of the resort area’s original plans, streets, and design.

“Certainly the villages in Vail and Beaver Creek have had this feature in place from the onset – giving both visitors and locals the opportunities to walk  in their communities, whether to visit friends, get to the ski mountain or enjoy the overall experience of the resorts.”

The results confirm previous surveys and studies that show that mixed-use neighborhoods are in relatively high demand. A study released by the Sonoran Institute earlier this year, dubbed “RESET: Assessing Future Housing Markets in the Rocky Mountain West,” which included survey results from the Town of Eagle, showed that compact, walkable communities sold at an 18.5 percent premium. 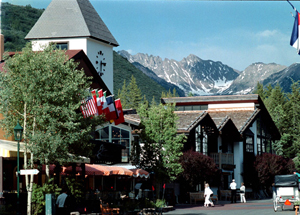 “The conversations we’ve had with communities show that it’s happening, and it’s been increasingly confirmed,” said Clark Anderson, an Eagle County native who now heads the Colorado office of the Sonoran Institute. “The question that emerges is, how do communities respond, and how does the private sector respond? Because the not-so-secret secret is that it’s still very difficult to get that type of development, particularly if its an infill project, through the process and off the ground. So there might be a growing segment of people that want to live in walkable mixed-use nieghborhoods, but it’s a departure from the way we’ve been growing the last 60 years, and it’s hard to get it done.

Anderson said that roadblocks to building walkable communities often come from both the public and private sector.

“The reality today is, a developer who is interested in getting a project of this type built faces considerable risk above and beyond what they might face if they were going to do a more conventional suburban project. That can be due to financing, moving it through the local policy structure and political process, or making sure that it fits in from a design and compatibility perspective with the rest of the community. It’s harder to do.”

On the other hand, he said, communities that pro-actively seek this kind of development are likely to reap rewards – not only in terms of more sought-after real estate, but also in terms of a stronger and more diverse local economy, a more tightly-knit community, and even improved health.

That’s in part because the costs for maintaining services tend to be lower in compact, walkable communities presenting less of a financial burden on the municipal or county governments, according to research from his organization, the national association of realtors, Smart Growth America, and others.

Developers seem to be catching on.

“I’ve noticed that walkable properties are being directly advertised as a benefit in real estate sales in Eagle County, more so than in the past,” said Eagle Mayor Yuri Kostick, who also runs Energy Smart Colorado in Eagle County.

The ‘walkable’ nature of a neighborhood can be part of its appeal, helping attract a talented workforce and bolster the economy, he said.

“One planning motto that we use in Eagle is, ‘We are a community where the trailhead is your driveway.’  This means that no matter what activity you want to do, you can leave from your house and get onto the path system to get you where you want to go without ever having to get in your car.”

Kostick said it’s no surprise that Eagle’s $15 million dollar roundabout project includes a new pedestrian bridge over I-70 to connect residents to businesses, and provide an alternative to car travel. Together with the completed renovations on Broadway, Kostick said Eagle’s walkability is, “very, very good.”

“Town planners, transportation specialists, and town leaders are all aware of this trend and are trying to increase walkability since it improves quality of life and safety and health for the citizens who live in these places,” Kostick said. “It also contributes to a better guest experience for the resort areas and for people visiting our small towns.”

Editor’s Note: A version of this story originally ran in the Vail Daily newspaper.