Construction to creativity, the art of building a better economy in Ridgway, Colo. 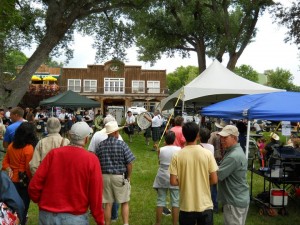 Ridgway already had a reputation for creativity, but the town of just over 900 people has now put itself squarely on the map as one of only five designated Creative Districts in the state.

There’s little doubt that the ‘Great Recession’ punched a hole in the American economy, but it dealt a particularly crushing blow to the construction industry. Along with manufacturing, construction was the sector most affected by job losses, with both industries experiencing their largest percentage declines of the post-WWII era (Bureau of Labor Statistics: Employment Loss and the 2007-09 Recession, an Overview (pdf)).

This means the recession wasn’t evenly spread throughout the country. In small towns like Ridgway, Colorado, where more than half of all businesses were construction firms as of 2005, the collapse of the construction industry landed a direct hit.

“We’re a community of diverse individuals and a lot of contractors and builders,” said Town Manager Jen Coates, whose husband is an electrician. “It was like, well now what? And there was some depression, and sadness, and confusion about what was happening.”

The sudden job loss left the town of just over 900 people reeling, but it wasn’t long before they began looking for solutions. They sought answers that would not only repair their struggling economy, but help it survive the bust-and-boom cycles intrinsic to any single industry. 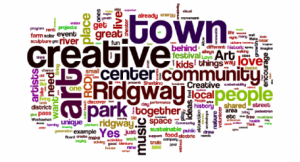 The Ridgway Prospective Creative Distruct committee set up canvasses on easels in town, and community members were invited to write out ideas they wanted to see implemented in the new creative district. The word cloud image was created from the comments on the canvasses, with the size of the word corresponding to the number of times it was mentioned.

After a series of county-wide brainstorming sessions, a citizen volunteer committee encouraged the Town Council to seek “Creative District Certification,” a designation from the state that could stabilize their arts industry, deliver a new source of funds to their community, and make the town more attractive to the passers-by who are heading to and from the nearby ski town of Telluride.

“It was a big change for a conservative Western community, and I don’t think Ridgway is unique in this respect. Traditionally your local government is for infrastructure. You provide water you take away sewer, you maintain roads and build parks, and that’s what you do, you’re public works.”

“Then it went to ‘Now I get it, here we are. Holy cow,’” Coates said. “People were asking, ‘Where’s our community development department? What about our local economy? No single one of us is going to get out of this alone, and how do we work together to do it.’”

It wasn’t Ridgway’s only trick, but when the town banded together they could see that becoming a Certified Creative District would have a huge effect on their Town’s turnaround.

The certification is done through the Colorado Creative Industries (CCI) project, which was created by the State of Colorado in 2010 to, “…capitalize on the immense potential for our creative sector to drive economic growth in Colorado.” 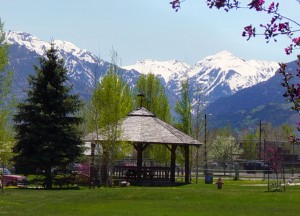 “By going after that designation, it’s branding the town in a way, and at the same time it provides support for the arts community that’s there,” said Jennifer Hill of the Sonoran Institute, who has been watching and occasionally advising the process from her office in Glenwood Springs. “They can build on that momentum to bring new businesses and new development into the area as well. It creates a snowball effect.”

Earning the distinction isn’t easy. More than 50 Colorado communities applied, yet only two originally succeeded: Denver’s Art District on Santa Fe and Downtown Salida, both in 2012.

Ridgway had to double-down on volunteer work to provide the necessary information, data, and measurable required by the CCI program. They had to show commitment to building an area that would encourage entrepreneurship, be supportive to artists and creatives, and beautify the town.

To qualify, a town must also show that it has a thriving art scene already in place, as well as the public support and backing necessary to undertake the kind of revitalization necessary to keep the District alive and successful.

From there, the State and the Boettcher Foundation can contribute time, resources, and tens of thousands to help a community build a long-lasting, culturally vibrant space in their town.

In June of 2013, Creative Industries certified Ridgway, making it one of only five in the state.

The success of this designation is only one signpost along the road to recovery.

“We’ve got quite a few things brewing over here,” Coates said. The town is helping build bike trails, working on a Main Street improvement program, and doing a lot of community outreach.

“We transitioned from a community that saw a lot of growth and development and construction to one that’s about community building and community organizing to create a different local economy,” Coates said. “It improves the quality of life and nurtures the quality of life, and provides access to the resources and amenities that people want to see here.”

The construction industry is recovering, and jobs in all sectors are slowly coming back. This time around, however, their businesses will be built on a much wider platform of economies.