Not quite the ‘End of the Suburbs’ 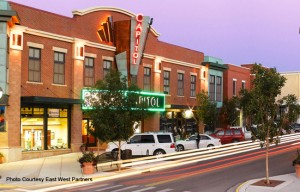 New land development projects, like this one in Eagle, Colorado, are beginning to incorporate a new set of planning ideals in order to meet an emerging market demand.

A new book is coming out today from Leigh Gallagher called, “The End of the suburbs: Where the American Dream is Moving.” The book promises to be a thoughtful, well-researched investigation into American market trends, the revitalization of city and town centers, and the challenges facing American suburbs.

The piece was previewed in yesterday’s TIME magazine, where Gallagher gave us insight into her premise: that the urban core is being revitalized, and suburbia is dwindling. Only a few decades ago, the term “inner-city youth” was euphemistic for “disenfranchised,” and yet now that trend may be reversing itself.

This book announcement comes on the heels of another high-profile article, by the New York Times’ Paul Krugman, entitled , “Stranded by Sprawl,” that examines the cascading economic effects of large-scale residential projects on city outskirts.

There’s little doubt that the national media is taking note of how urban planning can have tremendous long-term effects on the economy, from small-town main street to big-cities like Detroit and Atlanta.

But is it really the “End of Suburbia?”

Community Builders, a project of the Sonoran Institute, recently released an in-depth study of how these national trends hold up in the American West.

“It’s true that there’s growing interest and investment in our cores and city centers – that is, in fact, happening. But our research was a little more nuanced,” said the Sonoran Institute’s Clark Anderson. “What we found was not the ‘end’ of the suburbs, at least not based on our research, but we are seeing a growing segment of the market that is looking for something different.”

The study, as well as a short video and other materials examining the findings, is available here: Reset and Recovery: Housing Market Trends in the Rockies.

“More and more people want to be part of a real neighborhood that feels authentic and has character. And they want their time back. The convenience of being able to walk to school, stores or work pretty enticing to many people. At some level it’s a modern variation on the traditional neighborhoods of the pre WWII era.”

“The good news is that the American Dream is alive and well, but it does look different. And the public and private sectors now have an opportunity to respond to these market changes.”

Gallagher’s book concurs with this assesment, as well as Krugman’s article. In general, the national media are seeing trends quite similar to the regional trends we found in our RESET study.

National policy often fall victim to quick and deadly polarization, but Krugman and Gallagher both highlight another aspect of this trend, and what it means for policymakers, bankers, developers, and realtors around the country: it’s not a red vs blue issue, and it’s not so much about politics as it is about making smart, adaptive policy.

The common ground often comes in the form of wiser, more adaptive regulations, as we explored in a recent post on parking.

“It’s not really about bigger government or smaller government, it’s about smarter government,” Anderson said. “Government, as well as the private sector, should be able to respond to our increasingly complex markets. The reality is that today we’re not building the types of housing that people demand, and part of the reason is that our governments, from municipal to federal, haven’t been flexible, adaptive enough to current trends.”