Playing ‘Russian roulette’ with the flu 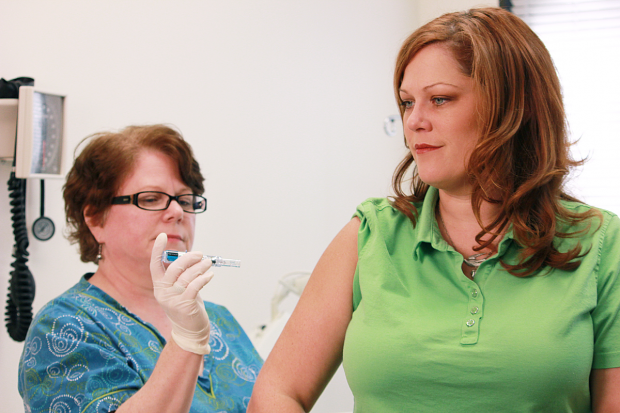 This year’s flu vaccine incudes one that protects against three strains of influenza, and another that protects against four. Medical professionals aren’t always certain exactly which strain will prove to be the most prevalent in a given flu season. (Photo by Douglas Jordan/Centers for Disease Control).

Influenza killed five children in Colorado last year, and sent 1,530 others to the hospital. And, overall, fewer than 50 percent of the state’s residents were immunized.

With a vast array of options – getting a flu shot or the nasal mist at the grocery store, at walk-in clinics and even at work – public health officials are hoping more Coloradans roll up their sleeves or offer up their noses for vaccinations this year.

“People who are generally healthy don’t think about getting flu but it can be severe,” said Colorado state Epidemiologist Dr. Lisa Miller. “You’re playing Russian roulette with getting sick by not getting the shot.”

Though the numbers are higher for young children and seniors getting immunized, last year fewer than 36 percent of people in the age group 18 to 49 years old got a flu shot. Miller says some people believe they simply won’t get sick.

The state does not track where the most – and the least – flu shots are given in specific geographic areas of the Colorado. However, Miller says an annual phone survey provides estimates of the percentages of those who get flu shots in specific age and high medical-risk ranges. (See sidebar for specific age group breakdowns on the 2012-2013 flu shots in Colorado).

Since the start of the flu season, there have been few documented cases of influenza in Colorado, and no related hospitalizations, according to the Colorado Department of Public Health and Environment. The flu season begins in earnest in December, and peaks in January and February. 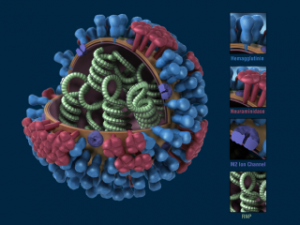 This illustration is a 3D graphical representation of a generic influenza virion’s ultrastructure. A portion of the outer protein coat has been cut away, which reveals the virus’ contents.
(Image by Dan Higgins/Centers for Disease Control)

This year two vaccines are being distributed – one is a dose designed to immunize against three strains of flu and another for four strains. Health professionals recommend everyone ages six months and older get vaccinated.

Some Coloradans maintain that the flu vaccine actually makes them sick – including giving them the flu. However, Dr. Joseph Brazee, Chief of Epidemiology at the Centers for Disease Control in Atlanta, says that is a myth.

“On the contrary,” he said, “The vaccine is the best way to protect yourself from a disease you think is serious, and in no way does it give a person the flu.”

However, flu vaccines are not 100 percent effective. The vaccine prevents the illness an estimated 50 to 70 percent of the time.

“We’d love to have a much more effective vaccine,” said Miller, of the state health department. “But what we have is a vaccine that still works most of the time.”

In addition to the vaccines being widely available at grocery stores and pharmacies, businesses are increasingly bringing shot services directly to their employees.

Coloradans who got the flu shot last year

Bonnie Thomas, a registered nurse and owner of the mobile clinic Colorado Wellness Connection, is one of several health professionals making the rounds this fall. Recently she immunized a staff of three dozen employees at a large veterinary clinic in Littleton, south of Denver.

Katie Thomasen, a veterinary technician, opted for the vaccine via a nasal spray, rather than the traditional shot in the arm.
“It hurts for about four days,” said Thomasen of the shot. “I’ve had the rabies vaccine from working here at the clinic. And I think that the flu shot hurt worse.”

Another worker in line for the vaccine, Mallori Beeghly, said her husband isn’t convinced the shot is effective. Still, she said, she gets the vaccination, and she vaccinates her two sons.

“I like to think that I am in that 60 percent that it helps, Beeghky said. “I’ve never had a problem. It might help, so why not just do it?”

Many health plans, including Kaiser, offer flu shots for free. Grocery stores and pharmacies generally charge between $20 and $30 for a shot.

Along with the increase in flu shot access, information about where the flu is hitting is becoming easy to access. Several websites and phone apps are available for consumers to check for updated Colorado-specific information about the intensity of influenza activity throughout the flu season. Google Flu Trendsprovides current Colorado-specific data, as well as where flu is hitting hard across the globe.

And Novartis – the maker of the medicine TheraFlu – has developed free iPhone, Android, Blackberry applications for tracking influenza outbreaks across the United States. The Centers for Disease Control also maintains and updates flu-related information at its website.