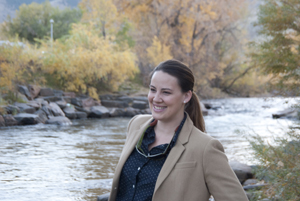 Erica Stock, of Trout Unlimited, says most gear manufacturers are learning that, ‘…women are not small men.’

There are no official surveys, and no exact numbers, but by and large it seems like fly fishing once placed fairly high on the list of “male-dominated” activities, and there’s little doubt that a female angler on the banks of a trout stream tends to raise an eyebrow or two.

Not so these days, where a casual survey of Colorado’s fly fishing cognoscenti confirms that somewhere in the past ten or 20 years women have made a significant ingress to a sport that’s long been known as guy’s turf.

“Fly Fishing is very restorative,” said Erica Stock of Trout Unlimited, who is known in fishing circles as one of the sport’s most accomplished fisher folk. “It’s not a race. It’s not a competition. It’s meant to relax you.”

And so, she explains, fishing emanates a kind of welcoming atmosphere from one angler to the next, be they male or female. Sure, there’s a bit of my-fish-is-bigger rivalry out there, but Stout said fishing’s inherently mellow nature takes the edge off most of the ego clashing.

She also notes that, much like yoga, which has been on the rise in recent years, fishing offers a kind of mental re-set that can sometimes be hard to find elsewhere.

“It has a meditative quality,” she said. “You have to remember that you will never achieve perfection, so you have to go into a kind of Zen Buddhist mindset.”

The mental aspects of fishing tend to level the playing field, especially in a sport where the gentle touch is just as effective as raw strength.

“It’s funny how often we’ll have a couple out on a trip and the woman will often, in fact usually, do better,” said Dave Johnson, owner of the Crystal Fly Shop in Carbondale.

Johnson eschewed beginners luck for a more pragmatic explanation: “Women have a great sense of listening to their guide,” he said. 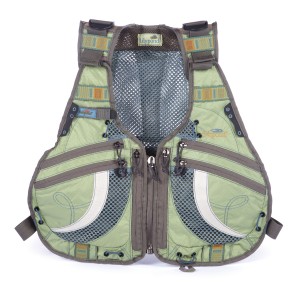 This Chica brand women’s fishing vest allows for more comfort, and a better fit, but products designed specifically for women are hard to come by in the fly fishing world.

Guides and fly shop owners are listening to their female customers as well. Johnson said that there’s not a fly shop he’s aware of that doesn’t offer some kind of specialty female gear – in particular with vests and waders, where fit can make a big difference.

Denver-based Fishpond, which specializes in fishing gear, has created the Chica Women’s Vest, which they beta-tested with some of Colorado’s top fisherwomen.

Creating women’s fishing gear is, “A tough balance,” said Fishpond co-owner Ben Kurtz.
“Most fisherwomen won’t want to go out in pink, and the stereotypical chick’s gear, so you have to have something that’s a blend of what’s appealing, but not offensive,” Kurtz said.

“There’s nothing worse than spending a day physically uncomfortable on the river,” she said. “But most gear manufacturers understand that women are not small men. Our feet aren’t as wide, and we have hips, so we’re going to want to get equipment that’s made to fit our bodies and allows us to move freely in the water.”

The R.L. Winston Rod Company even has a rod that was specifically designed by the petite yet powerful Joan Wulff, one of fly fishing’s most accomplished casters, who once cast 161 feet in competition. The rod is loved by both genders, but female anglers can perhaps find a bit of solidarity in using one of Wulff’s designs, and a shaped handle provides a more secure grip for those with small hands.

A Wulff rod is also a keen reminder that, when it comes to casting, technique is far more critical than strength.

The same is true for all aspects of fly fishing, where patience, precision casting, and experience are paramount, and brute strength is almost always detrimental. With sensible and stylish gear now available in virtually every fly shop around, it’s no wonder that women have returned to their rightful, comfortable place on the river as they re-join men in enjoying one of human kind’s most enduring pastimes.