Detroit Future City: Lessons for the West from a city that learned the hard way

The Detroit Future City project has involved hundreds of meetings, more than 30,000 conversations and over 70,000 survey responses and comments from participants. (detroitworksproject.com).

A great experiment is under way in the American Midwest. It didn’t happen by design – in fact, much of what’s happened in Detroit is due to a lack of design – but it has left the rest of the country, including us here in the Rocky Mountain West, with a lot to consider as we prepare our own cities and towns for the growth and change to come.

Mindbending, would be the term, for some of the truly shocking facts circulating about Detroit. The city, proper, had a population of more than 1 million in 1990. In 2009 it was 910,921, and just over a year later it fell off a cliff, hitting 711,774 during the 2010 census. Detroit has filed for bankruptcy, seen entire neighborhoods left abandoned, and witnessed an 10.3 percent unemployment number – more than double the national average. 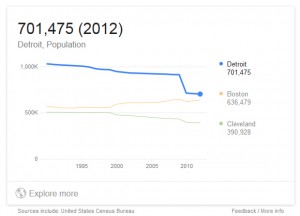 Here’s the clear lesson from the Detroit debacle: Don’t put all your golden eggs in one basket. Detroit relied far too much on the auto industry, and failed to institute the kinds of growth and city planning steps that make a city appealing to other industries. Quality of life, good transportation infrastructure, high-quality schooling … all of these things attract talented workers and the businesses who hire them.

Some of this may seem obvious, but throughout the American West, we are making the same mistake, in particular when it comes to energy production. Or, in places like Vail and Jackson Hole, that golden egg is the ski industry. Even in good times, it’s not good for an economy to rely on one industry alone.

When these industries are no longer profitable, they shut their doors and leave in a moment’s notice. It happened in Rifle, Colorado, and it’s happened time and again throughout the American West.

So there are other options: diversification of the economy is paramount to a city or town’s healthy survival.

And there are other lessons coming from Detroit. Motor City has become an experiment in motion, a place where citizens and officials have united to come up with a new plan for revitalization that they are hoping will bring the city back to life.

And that’s what I like most about the Detroit story: people from all sectors are coming together to solve the problem under a new program called Detroit Future City. Detroit isn’t brewing a top-down solution and force-feeding it to the populace: More than 70,000 citizens are taking part in the process. That’s not all: investors are weighing in with their dollars and sense, public officials are clearing the way, and right now, even at Detroit’s darkest hour, there is a sense of opportunity.

I’ve been watching Detroit closely. There’s a lot going on, more than can be summarized in one post, but here’s my “Top 6” Detroit-related links that I found enjoyable and edifying.

Every town, every city, is different. And here in the West we like to think we’re a bit special, a bit above all the problems of the Rust Belt. 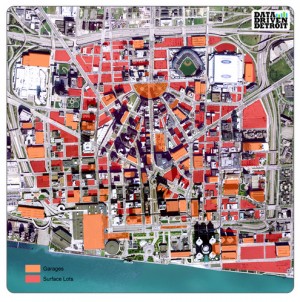 This map of parking availability in downtown Detroit, created by the Downtown Detroit Partnership, has been getting lots of play on link-sharing sites like Reddit and Twitter.

But there are some fundamental truths coming out of the mess that is Detroit, and these truths match up perfectly with a recent study from the Sonoran Institute (full disclosure: I worked on this project) about neighborhood preferences in the American West.

Here and in the Midwest (and everywhere, if you ask me), people want to feel like they’re part of a community. They want to live in a safe environment, and one of the best ways to do that is to get people out of their cars and out on the street. They want complete neighborhoods. Most people don’t want miles and miles of suburbia, followed by acres and acres of Big Box parking lots: they want restaurants and cafés and shops and grocery stores, all within walking distance of their home. They want good schools for their kids. All of these elements are part of Detroit’s ambitious revitalization plan.

Detroit Future City is a long way from succeeding, but at least they’ve got the first step right: everyone in town has been invited to participate, and that goes a long way toward making things work.

Editor’s Note: A version of this story was originally posted on CommunityBuilders.net, a project of the Sonoran Institute.

One Response to Detroit Future City: Lessons for the West from a city that learned the hard way