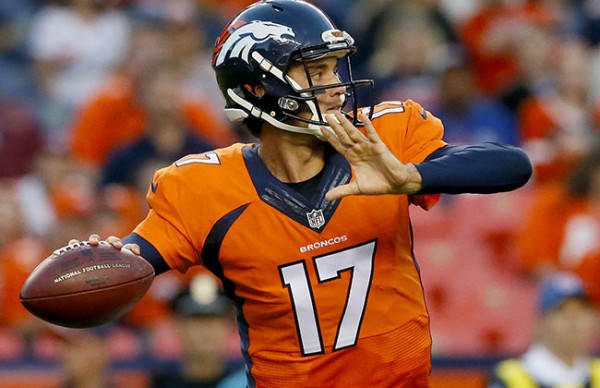 So long to the Brockweiler. While Brock Osweiler helped the Denver Broncos get home-field advantage in the playoffs by subbing for the retired Peyton Manning last season and going 5-2 (including critical wins over Cincinnati and New England), let’s not pretend he was the second coming of Manning, or his former boss, John Elway.

Osweiler totally deserved to cash in and move on to the Houston Texans, especially after being benched in favor of Manning against San Diego and then watching the future Hall of Famer gobble up all the glory in the playoffs and Super Bowl. But Osweiler didn’t earn his ring as a starter in the big game, and his best chance of doing that was likely with the Denver Broncos and not the perennial sad-sack Houston Texans.

The Denver Broncos are 3-5 in Super Bowls, meaning they get there a lot and they win it once in a while. Houston? Not so much. Denver offered Manning’s four-year understudy with a very short resume a whopping $16 million a season, but he jumped for an extra $2 million per, one more year on the contract and most importantly $37 million guaranteed versus “only” $30 million from the Broncos.

It’s easy for fans to say, “Stay in Denver and take advantage of that dominant defense that basically won the Super Bowl despite Manning and the inept offense,” but $7 million is a big difference. To me, $7,000 is a big difference. However, I don’t blame Elway for not blinking and letting Osweiler walk. Chances are better Osweiler will flame out in Houston before he becomes another Elway or Manning, and he clearly didn’t want to be in Denver.

And last weekend’s late-night drunken pizza shoving incident involving Osweiler in Arizona couldn’t have helped his cause. That’s a major judgment red flag when a QB is looking to cash in on free agency and he’s out that late in public and clearly well-oiled. He ultimately did the right thing by walking away despite being shoved hard in the back, but he shouldn’t have been in that place at that time in the first place, and he pushed a woman during the incident.

Not comparing the two, but late-night public partying and allegedly abusing a woman are two big reasons Johnny Manziel just got released by the even sadder-sack Cleveland Browns, where San Francisco 49ers QB Colin Kaepernick reportedly wants to go instead of the Denver Broncos. Having heard that clear lack of judgment, I am no longer excited about the possibility of Kap coming to town.

While Kaepernick is an explosive player who guided the Niners to the Super Bowl just a few years ago, he’s lately shown a lack of locker-room leadership and now displays a desire to hide from the spotlight in the NFL black hole of Cleveland — a city Elway forever relegated to “Mistake by the Lake” status via the “The Drive” and “The Fumble.” If Kap wants to go there, we don’t want him in Denver.

Trevor Siemian is currently the only Denver Broncos quarterback under contract, and he showed me a lot in the preseason last year. I like Elway’s ability to pick talent and then develop it, so I think he knows what he’s doing in the draft and free agency, and I don’t think any true Denver Broncos fan should be pushing the panic button with Elway in charge.

Also don’t expect me to get too excited about the Denver Broncos acquiring Mark Sanchez, who has that AFC Championship Game experience from early in his career on his resume but is also is the owner of “The Butt Fumble.” This is a guy who inspired so little confidence in New York that they actually picked up Tim Tebow, who was replaced by Manning in Denver and now is a TV commentator.

Now here’s a blog on Manning’s legacy that I posted on RealVail.com last week:

A few weeks ago I addressed a 20-year-old sexual-assault allegation against Denver Broncos quarterback Peyton Manning, expressing my concerns about a case with some ugly implications for the University of Tennessee and the legacy of one of the greatest players in NFL history. Now as Manning retires from the sport, new details of the case have been exhaustively reported by Sports Illustrated, a magazine that sells a lot of copies with pictures of women wearing next to nothing but is still capable of some excellent journalism.

It is strange to go to the SI website and see swimsuit models so prominently featured for a presumably leering and mostly male audience next to coverage of former ESPN reporter Erin Andrews’ successful lawsuit against Marriott for allowing a stalker access to a room next to her so he could take a video of her naked and post it on the Internet. Seems like they’re pandering to the same class of reader as the stalker.

The irony of the source aside, SI has done an incredible job of reporting details of the case that paint both Manning and his accuser in a very different light. It is not a cut-and-dried case of sexual assault, and while vilifying the accuser is a tried-and-true way of diverting attention from the accused, there is a disturbing pattern to the behavior of Manning’s accuser that deserves to be more widely reported.

SI found another witness to the college locker room incident in which athletic trainer Jamie Naughright alleges Manning thrust his genitals in her face. That witness backs Manning’s version of events, which a second witness also did not dispute, and supported the quarterback’s story that he crudely was attempting to moon a teammate. He admitted his mistake and the university later settled with Naughright for $300,000 on the condition she leave the school. No charges were ever filed against Manning, and no police investigation ever occurred.

The SI story goes on the detail several other lawsuits and settlements Naughright filed and collected on after the Manning claim, including one in which she went after a former friend after the trainer slipped and fell in front of the friend’s restaurant. The former friend paints a picture of a woman who sues for a living. The piece also quotes former coworkers who backed Manning’s accusations that Naughright was crude and unprofessional.

Finally, the story delves into Naughright’s attempts to bring the 20-year-old Manning case back into the spotlight, including numerous profanity laced messages to journalists insisting they dig the story back up (as if it had been buried when reported on in the nation’s newspaper, USA Today, in 2003).

This story should be mandatory reading for columnist Shaun King at the New York Daily News, who ran with a one-sided hatchet job on Manning after the Super Bowl in an attempt to make it a racial story. His point was that Manning was being coddled by the media while African-American quarterback Cam Newton was blasted for his sulking post-Super Bowl press conference. His column looks very thinly sourced now.

But it was picked up and widely disseminated on social media by people who now will never go back and read the detailed SI piece, and ESPN talking heads, particularly female sports anchors, continue to run with the one-sided version of events first “reported” by King. They too have clearly not read the SI piece, and likely never will.

SI drew some heat for its story, including reports and interviews that questioned the veracity of its new witness, and the motivations of the magazine were also questioned by critics who say they’re blaming the victim. But it’s the only media outlet I’ve seen that’s really reporting the story the way it deserves to be reported if you’re going to dredge up a 20-year-old case to impugn the character of someone who’s done so much good in all the communities he’s lived in, including Colorado. King’s column and subsequent reports in other outlets have been exceedingly irresponsible.

What this all demonstrates is the danger inherent in today’s Twitter-driven world of sound bytes that sensationalize without providing necessary context. After reading the SI story, I now think Manning has less to explain than he did in mid-February, and on Monday USA Today asked him about the case and received his direct denial. But I do still think that as the father of a young son and daughter he should give serious thought to sexism in college sports.

There is a climate in locker rooms that promotes macho antics and outright sexual aggression by athletes. It starts in high school and maybe even earlier, and it has to be combated by people in Peyton’s position of influence. He needs to teach his young son and other young boys how to act so that his daughter and other young girls don’t have to be subject to disgusting, dangerous and degrading behavior.

I said in my original blog and I’ll repeat it now, Manning can use his enormous platform to tackle the issue without ever even addressing what happened in Knoxville 20 years ago. The conditions of the settlement demand that he stay silent on the details, but he could have so much influence on so many young people by forming a foundation and taking on the topic the way he has taken on so many defenders so impressively throughout his storied career — head-on and with unflinching resolve.