Busted by the bull: elk hunting on foot in the Eagle’s Nest Wilderness 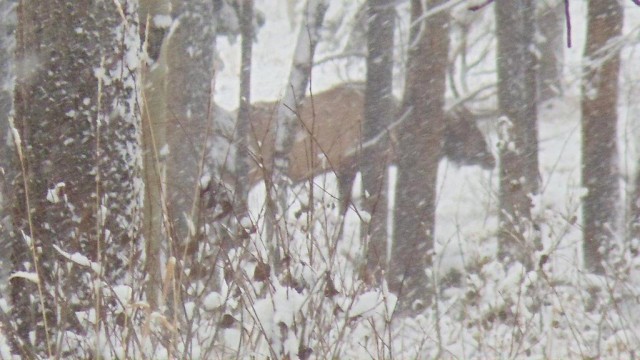 A mid-sized bull elk feeds in a meadow in the heart of the Eagle’s Nest wilderness (Photo by Steve Boyd).

Editor’s Note: A shortened version of this story first appeared in The Denver Post Outdoors under the title: No bull: Hunting elk not just about trophies.

It never ceases to amaze me how a 700-pound bull elk can just appear out of nowhere, in a flash, and then just as suddenly dash away.

On opening day of elk hunting season, six-to-eight inches of snow had smothered the Eagle’s Nest Wilderness in silence, and I’ll admit that, just for a moment or two, I might have stood there in the deep timber, miles from nowhere, and caught a few snowflakes on my tongue. I might have looked around a bit, wondering which way to go.

For more information about hunting Colorado, visit the Colorado Parks and Wildlife site.

In the end, I might have decided to just stand among acres of fallen timber and just let my senses take over for a bit. They usually know which way to go and, anyway, it felt like something was up.

The wind changed, and suddenly I noticed a very big animal standing directly in front of me. Not the whole elk, of course. That would be too easy. Just a vertical sliver of the hindquarter: tan and brown, tall as a horse, and not more than 20 yards away. He had been enjoying a late morning nap and I had rudely interrupted. He sprang to his feet and I instantly lamented the one great problem with hunting deep timber: namely, the trees.

Somewhere behind this wall of trees was the elk’s head – the part I needed to see to confirm, for certain, whether this beast was a boy or a girl. Based on his size, I pretty much already knew. In the blink of an eye he obliged my needs, pivoting toward me, head down, antlers providing an impressive crown to his highly intense, I’d even say challenging, glare.

He had me locked in. 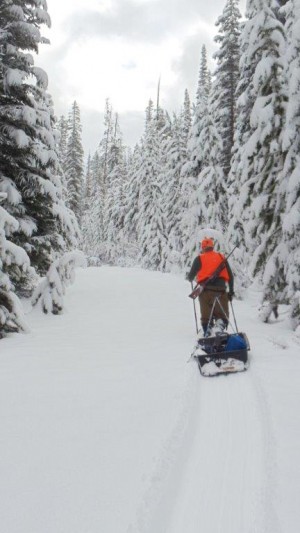 Pulling our sled up the dead-end road. Wheeled devices aren’t allowed in Wilderness Areas, but sleds are. For purposes of full disclosure, my brother did most of the heavy pulling while I hunted the nearby trees. He snapped this shot as I took it the last few hundred yards. (Photo by Steve Boyd).

He was probably a five-point, although it’s hard to say because antlers and branches were interwoven together in my line of sight. Sex confirmed, my choice was clear: stand still as a chess piece and see who else comes out to play. My tag explicitly required me to ignore any kings, although queens would be another matter. This guy was manly enough to have earned some female accompaniment, and I figured I’d try and wait him out, see if any of his concubines were feeling curious. At this point I was what my brother, Steve, cheerfully refers to as, “busted,” and my chances of coming out of the situation with steak and burger would be somewhere between slim and none.

Keep in mind, this staring match was a reward in itself, the kind of rare thing that makes the hunt a hunt, and it was hard won. With plenty of hunting to go, and lots of snow on the ground, I knew I’d have another chance.

Over my 15-plus years hunting in Colorado’s wilderness areas, I’ve come to have a sense for where the elk are – but I’m not nearly as good as some of the true hunters out there. My father, a luddite of admirable tenacity, raised our family largely on elk, venison, pheasant, grouse, and the odd goose or duck. Food in general, I came to understood, came sometimes from West Vail Safeway, and sometimes from the mountains north of Vail, where he has been hunting since he came to join ski patrol in the winter of 1963-64.

My brother and I, of like mind on these issues, had decided to return to the old hunting grounds after a five-year hiatus. Without horses, hunting a

Wilderness Areas is done on foot, which means everything goes in and out on your back. Dad, who is now somewhere north of 75, hunted from a base camp down below, and my brother and I, loaded up like mules, made camp about 6 miles up a little-travelled side valley where elk are known to take refuge.

Camp wasn’t quite the Ritz, but spirits were high. The fresh snow meant tracking would be easier, and a lack of other human or horse sign meant we had the turf to ourselves. 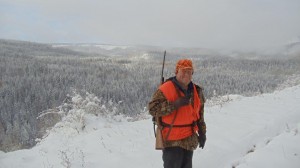 Come late morning, opening day around 9 a.m., my spirits had already dipped. Hell-bent on crossing tracks, I had moved at the kind of pace one usually reserves for summiting a 14er – not for stalking prey. After carving a wide figure-eight through open terrain and pencil-pines, I had come up empty. Not a bit of sign, not one track, and not even the echoing volley of someone else’s gunshot had come my way.

It was clear where they lay. I looked across the other valley wall, still in shade, and could almost picture them lazily chewing their cud, safe behind ramparts of timber. I knew my chances were slim. I knew I’d be humping up and down over logs most of my day, and even if I were lucky enough to sneak up on one, I didn’t revel in the prospect of getting it out, on foot. But who knows? Maybe I’d bump a few uphill, toward the general area of my brother, and he’d cross a track. At the very least, I’d stir things up. 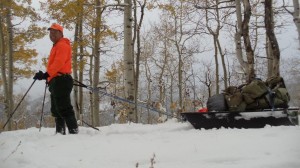 Steve, pulling the sled on one of our trips out. Any wagers on how much this sucker weighed?

About a half hour later there I was, standing eye-to-eye with my big bull. I guess my ability to hold still wasn’t quite the thing, because after a few moments of checking me out, he caught my drift, literally and figuratively, and trotted off through the deadfall. He moved with gravity-defying grace, almost silently, and I could hear his small group of five or six move away with him.

I took my time examining their tracks, trying to figure where they were headed. At first they split up, then they regrouped and circled back, uphill and away – this seems to be a top call in their playbook. Catching up seemed like another longshot. By now they were long gone. A better bet, I determined, would be cutting down across the ridge to a saddle, where hunting pressure from the other valley might push a few my way.

I took one step on my new course and heard a rifle shot, about a half-mile away. My brother, who had been searching for a warm rock to enjoy lunch, got an unexpected visit from my bull and his harem. Like me, he had an antlerless elk tag. This time, however, the bull was out of sight and a cow-elk made a momentary appearance among the aspen trees.

Like most of our family hunts, this one doesn’t end with a record bull in Boone and Crockett. There aren’t any trophies mounted on the wall, or photos of us smiling over the carcass. There is, however, some 100 percent natural steak and burger in the freezer. Reward enough, I guess. 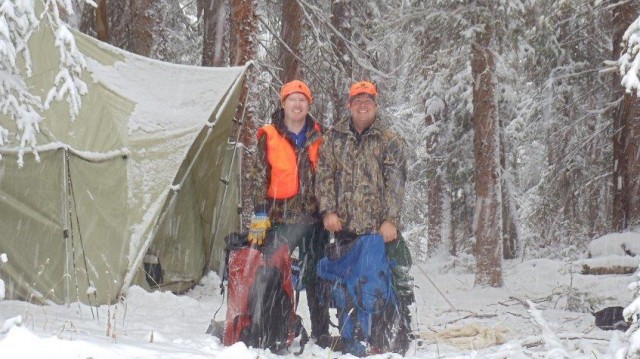 My brother, Steve, at right, and myself at our camp. (Photo by Steve Boyd).

One Response to Busted by the bull: elk hunting on foot in the Eagle’s Nest Wilderness