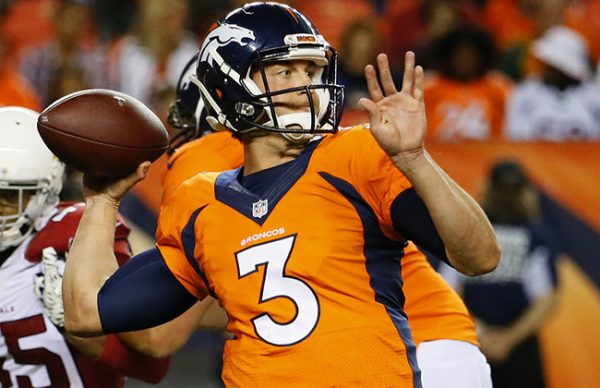 Finally, the East Coast-biased national sports news network ESPN showed that its analysts are actually capable of opening their collective eyes and accurately assessing the defensive and now to some degree offensive prowess of the Denver Broncos. And it took a former Pittsburgh Steelers defensive back, Ryan Clark, to set the record straight and decry the love-fest showering down upon Tom Shady, Bill Belicheat and the New England Patriots.

In case you missed it, the video is below and it shows Clark and then Max “He’s No Skip Bayless (Thank God)” Kellerman setting the producers of ESPN’s First Take show straight by pointing out the fallacy of this debate topic: “Are the Broncos now the biggest threat to the Patriots in the AFC?”

Both Clark and Kellerman correctly state that it should be phrased the other way around, reminding the moderator that the Broncos are the defending Super Bowl champs who pummeled Brady in the playoffs last season and remain an utterly dominant defense.

Yes, the job done by the Patriots cobbling together three wins with two untested quarterbacks is very impressive. But check out Trevor Siemian doing what no first-time road starter has ever done in league history, tossing four touchdowns, over 300 yards and no interceptions (although he should have had at least one).

Looks to me like the Broncos reloaded after losing just two starters from a Super Bowl-champion defense that drew comparisons to the 1985 Chicago Bears. The Broncos are so loaded that they withstood the loss of Demarcus Ware (Shane Ray had three sacks) and continued their run of hammering elite quarterbacks.

Rewind to last season and the Broncos have now shut down Ben Roethlisberger (in the playoffs), Brady (in the AFC Championship Game), Cam Newton (in the Super Bowl), Newton again (in the opener), Andrew Luck (in game 2) and now Andy Dalton. That’s quite a run, and they show no signs of dropping off against Jameis Winston, although the road tilt against the 1-2 Buccaneers on Sunday looks like a classic trap game.

Please note that on First Take Stephen “What’s the A. Stand For?” Smith continued to throw shade at the Broncos, questioning their strength of schedule in the first three games. What? You can do that with the Patriots, but Kellerman corrected him on the Broncos. The defending NFC champ and two perennial playoff teams? Not tough enough for you? Smith is showing his ongoing bias against the geographically challenged Broncos.

He, at least, has an excuse because he lives back there. Our local sports pundit, Chris Freud of the Vail Daily, continues to show his relentless West Coast bias by predicting at the beginning of the season that the Broncos would not even make the playoffs, let alone mount a legitimate Super Bowl defense. This nonsensical take was picked up by the Associated Press.

Now I like Chris, and I consider him a friend, but his obsession with all things Bay Area has blinded him to the greatness in his own back yard. Plus, I’m going to have to make like a biased Trump fact-checker and clear up something he wrote in that column:

“And then there’s the schedule – the Broncos open with Carolina, Indianapolis and at Cincinnati,” Freud wrote [not a problem apparently]. “The Texans are coming to town for the Brock Osweiler Bowl [and how good did they look losing 27-0 to the Patriots last week?] and Denver has to go to New England late in the season, meaning not the first four weeks when Tom Brady is out.”

Actually, Chris, as I’m sure a lot of your readers pointed out, the Patriots have to come to Denver again this season, finally correcting a schedule imbalance that had the Broncos going to Foxboro an inordinate number of times in recent years. That means New England will have Brady back, but they have to play at Mile High on Dec. 18, possibly with home field advantage in the playoffs at stake.

Remember how the Patriots squandered home field with a late loss to the Dolphins last season? Denver probably doesn’t win its third Super Bowl title without that advantage. And yet everyone wants to talk about Patriots coach Bill Belichick as the GOAT (Greatest of All Time).

Really? He pissed that possible Brady championship away last season, and Eli and Peyton Manning together have kept the Patriots from possibly winning four more titles. If Belichick and Brady had eight rings (Spy-gate and Deflate-gate be damned, I would have to concede GOAT status. But they don’t, and so I won’t.

Anyway, good to see the national pundits finally getting it right, and I’m sure Freud will come around eventually too. And thanks to those of you who read my blog last week on Brandon Marshall, who was joined in protest by T.J. Ward on Sunday — even those of you who disagreed vehemently and took the time to post comments.

That’s what makes this country great. Our freedom to openly debate touchy topics and agree to disagree.