Strange season comes to a close for Shiffrin, Vonn 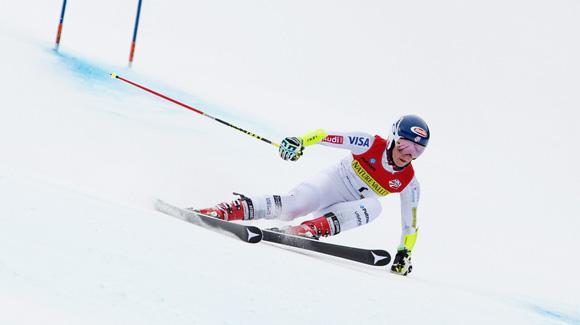 The 2015-16 World Cup ski racing season was a strange one for both Vail Valley superstars Lindsey Vonn and Mikaela Shiffrin. Vonn’s ended in injury with an overall title in her grasp, and Shiffrin might have competed for that title as well if not for a mid-season injury.

Shiffrin, an Eagle-Vail resident who recently turned 21, managed to come back and end on a high note with three World Cup slalom wins in February and March, and on Sunday she claimed a rare giant slalom victory in the U.S. Nationals in Sun Valley, Idaho. It was the second time she’s won an American title in GS — a discipline she’s claimed victory in only once on the World Cup circuit.

During her short but amazing World Cup career, two-time world champion and Olympic slalom gold medalist Shiffrin has won 19 World Cup slalom races and one GS, and she won five times this season, surpassing Tamara McKinney for second on the all-time wins list among American women.

First on that list, of course, is Vail resident Vonn, the 31-year-old Olympic downhill gold medalist who holds the all-time women’s victory record with 76 — nine of them this season.

“It’s been a long/amazing winter with a lot of ups and downs, but now the season has come to an end,” Vonn wrote last week on Facebook. “I’m heading home now and before I leave I wanted to take the time to congratulate Lara Gut and Marcel Hirscher on the overall titles, all of the discipline winners, my teammates, and all of my friends on the World Cup for a successful season. It was hard not being able to be at all of the World Cup finals but it was good to regroup and recharge with my family. My sisters and I haven’t all been together for a loooong time. Sister love is an awesome thing! Can’t wait for my knee to heal so I can start training hard again. I’m already excited for next season!! Thanks to my coaches, sponsors and fans for all of the support as always.”

Speaking of sponsors, Rocky Mountain Post partner RealVail.com caught up with Shiffrin over the holidays and wrote a piece for ESPN.com on the progress of her rehab and her goal of returning to the World Cup circuit by March. Clearly she reached that goal.

When she injured her knee in a training run at Are, Sweden, in December, Shiffrin was just four points behind Vonn in the overall World Cup chase. After not racing for more than a month, Shiffrin was still 15th.

When RealVail.com first talked to her in person at the Westin in Avon during a media event hosted by her main sponsor, Barilla Pasta, Shiffrin was coming off two huge wins in Aspen and was poised to compete for the overall chase.

She celebrated Aspen by heading home to Eagle-Vail and watching the Denver Broncos play the New England Patriots with her family. Born in Vail, Shiffrin split time growing up in Colorado and New England, so for football fans who then watched the Pats-Broncos playoff rematch, here was the most interesting part of that interview:

“I’m a Broncos fan,” Shiffrin said. “Well, I’m an everybody fan. I’m a fan of anybody who plays their sport really well. I mean, [New England’s] Tom Brady is an excellent quarterback, an excellent athlete, and I think all football players are some of the best athletes of any sport.”

Really, can you be a fan of both? Apparently if you’re an Olympic gold medalist ski racer, that is allowed.

RealVail.com also asked her about her social life for People Magazine, which took a pass on the information that she’s not currently dating. Clearly she should have hung out with Taylor Swift over the break. ESPN.com also cut out reference to who she’s dating (or not) these days.

“I’m an open book,” she said at the time. “No, I’m not [dating anyone] actually. I’m not dating anyone scandalous. Yeah, I’m single and ready to mingle.”

Shiffrin, who previously was linked with fellow U.S. Ski Team member Brennan Rubie, then clarified her status in a in a later email interview:

“I’m still not dating anyone,” Shiffrin said. “I’ve been asked this several times, and I always say, ‘Nope! I’m single and ready to mingle,’ which isn’t quite true. I’ve been really busy lately and I can’t imagine setting aside extra time to be in a relationship right now. However, I like meeting new people and keeping an open mind.”

She was busy rehabbing relentlessly, especially after Dr. Bill Sterett of Vail Summit Orthopaedics, Vonn’s previous doc, found a hairline fracture in her knee on top of deep bruising and an MCL tear.

Shiffrin said she considered taking some time off and going somewhere warm but opted to stay home with family and rehab hard in order to get back by March. That drive clearly paid off when she earned more points in speed event (super-G), got her GS back on track at nationals, and continued her utter dominance in slalom at the World Cup finals.