“As a member of the Jewish community, I am hurt every time our history is denied, and as an American and human being, I am appalled by Sean Spicer’s recent assertion that Hitler did not use chemical weapons,” Polis said late Tuesday in response to Spicer’s comments earlier in the day.

“It is a fact that the Nazis used lethal gas to murder millions of Jews and other minorities. To say the contrary is to undermine the memory of each innocent victim. Every time the administration spews alternative facts, the entire nation suffers and loses credibility worldwide.  I strongly implore the administration to retract the comparison set out by Sean Spicer. If we deny history, we’re bound to repeat it.”

During his daily press briefing on Tuesday, Spicer — in the context of talking about last week’s chemical weapons attack in Syria — had this to say about Hitler: 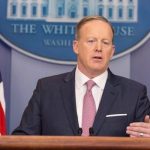 “We didn’t use chemical weapons in World War II. You know, you had a, you know, someone as despicable as Hitler who didn’t even sink to using chemical weapons,” Spicer said in an attempt to impugn both Syrian President Bashar al-Assad and his Russian allies.

In fact, the Nazis used hydrogen cyanide gas at concentration camps as one of many lethal weapons in their overall mass murder of an estimated 6 million Jews from all across Europe.

“[Hitler] was not using the gas on his own people the same way that Assad is doing,” Spicer said. “He brought them into the Holocaust centers, I understand that. But (not) in the way that Bashar al-Assad used them where he went into towns, dropped them down, into the middle of towns.”

The Nazis did not use battlefield chemical weapons, but killed thousands and thousands of German and Austrian Jews in concentration camps — not “Holocaust centers.”

“He needs to go,” Coffman said during a town hall meeting. “I just don’t think he’s serving the president well.”

The Trump administration has been accused of anti-Semitism for a variety of reasons, and President Donald Trump drew fire from the Jewish community during his controversial campaign in 2016.