Polis optimistic wilderness bill will someday make it through Congress

Congressman Jared Polis, a Boulder Democrat who represents Summit and eastern Eagle counties, expressed optimism this week that his long-running battle to add more than 40,000 acres of federal land to the wilderness inventory could someday actually see be won. 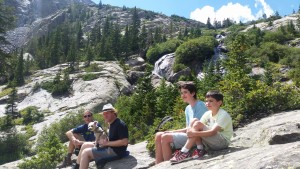 His proposed Continental Divide Wilderness and Recreation Act would add 40,000 acres of public land to the Holy Cross, Eagle’s Nest and Ptarmigan Peak wilderness areas in the two high-country counties. It would also designate another 15,000 acres of the Tenmile Range near Breckenridge as special Recreation Management Areas to allow for mountain biking.

“This bill is very well positioned to get it done,” Polis told RealVail.com during a hike Sunday up McCullough Gulch in the proposed Tenmile Wilderness addition on the flanks of 14,265-foot Quandary Peak in Summit County.

“The holdup, of course, has been that Congress hasn’t done a single wilderness bill in the last two sessions,” Polis added. “When Congress is once again ready to look at some wilderness, this is really queued up to be one of the very first ones that goes through.”

That’s because Polis has spent virtually his entire seven-plus years in Congress trying to craft some version of a wilderness bill that would have the wide-ranging support of special districts, elected officials, business representatives, and a diverse array of user groups and local residents. Unlike the massive and controversial Hidden Gems plan before it, Polis says this bill has it all.

“There’s a tremendous amount of community support from the towns, the special districts, the counties, local businesses, and we’ll be very excited to get it across the finish line so that others can enjoy this very same hike decades from now, centuries from now,” Polis said.

Wilderness designations offer the highest level of protection for public lands, prohibiting any kind of large-scale development or infrastructure projects such as ski areas, mining, oil and gas drilling and other extractive uses. It also restricts mechanized travel.

Asked about getting a hearing for his bill this session in the House Natural Resources Committee, which Polis serves on, he said he’ll continue work with Chairman Rob Bishop, R-Utah.

“We’re continuing, obviously, to push for a hearing,” Polis said. “That would be the next step. I think this is one of the best positioned bills to move forward as soon as the Committee and the House are open to considering any wilderness proposals.”

Pressed on whether that will ever realistically happen with Bishop as chairman, Polis said there could be room for a deal.

“We’ll see. He’s expressed an openness to wilderness,” Polis said. “They haven’t moved any wilderness bills, but he has some things he wants to do on land management, so we’ll see if there’s a way we can get this included.”

And Polis added that it’s helpful U.S. Sen. Michael Bennet, D-Colorado, is coming close to introducing his own version of the bill in the upper chamber, including a proposed new National Historic Landmark designation for the old 10th Mountain Division training area of Camp Hale.

“Any bill needs to be bicameral, of course,” Polis said. “We’ve been very thrilled to work with Sen. Bennet and excited about the inclusion of Camp Hale as well.”