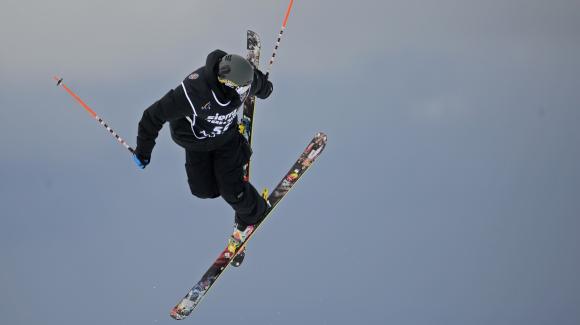 American men historically swept the podium last week in the Olympic debut of slopestyle skiing at the 2014 Sochi Games, and at least one Boulder woman – who admittedly may be just a bit biased — is calling for another three-peat Tuesday in the debut of halfpipe skiing.

“I think we need to have three silver jackets on the podium for halfpipe as well,” laughed Cecily Wilson, whose son, Lyman Currier, will be competing Tuesday. “That would be beautiful; that’s what I’m envisioning.”

In fact, Wilson has three Colorado free-skiers in mind. Her 19-year-old son Lyman and his two buddies from years of driving around on the circuit as the new-school, X Games sport of halfpipe earned its place on the Winter Olympic slate in 2011.

“Lyman said he couldn’t be happier traveling with this team of buddies that he’s been with for a long time,” Wilson said. “There’s a lot of security within that, and they egg each other on and push each other to be the best they can be. So I think there’s something to be said about traveling with a force like that. At the end of the day they want nothing but the best for each other.”

Wilson said no matter their results, the three U.S. Ski Team members will be pulling for each other.

“Even at X Games, when Torin was [injured and] unable to compete, there he was supporting all of his other buddies who were up there” Wilson said, “and there’s something to be said about that sort of strength of character and that ability to really genuinely want the best for your friends.”

Yater-Wallace became the youngest X Games medalist ever at age 15, an event that lit a fire under his two teen teammates.

Currier, 19, earned a spot at the Olympics with a win in the last of five qualifying events in Park City, Utah, about three weeks before the Sochi opening ceremonies. Wilson wasn’t able to pull off the trip to Russia, but her ex-husband, David Currier of Sun Valley, Idaho, is there representing for the whole family.

David Currier raced downhill and giant slalom as a 19-year-old at the 1972 Winter Olympics in Sapporo, Japan, failing to finish the GS and coming in 17th in the downhill. He made the 1976 Olympic team but broke his leg prior to the Games and was to unable to compete in Innsbruck.

Wilson, an orthopedic nurse at the Boulder Surgery Center, knows a few things about sports injuries, and so she felt Lyman’s pain when he tore his anterior cruciate ligament (ACL) with a backseat landing in a slopestyle event.

“He was just starting to emerge and seeing that he really had a future and had a talent and could go somewhere with this, and then for me to have this terrific fear that [the injury] could put a halt to all of this,” Wilson said. “That was really hard for us.”

But after a long, hard rehab, Currier came out the other side and has risen to the top of his sport, winning World Cup competitions and pulling off some of the toughest tricks in the fledgling event.

There are some Canadian and French skiers capable of climbing on the medal stand, and veteran David Wise, of Reno, Nev., is the old man of the sport at 23, but the three Colorado teens – Yater-Wallace is 18 and Blunck is 17 – represent the future of the sport.

“I love the idea that yes the Olympics are really embracing this new force, this new venue that’s coming alive. Maybe in the very beginning they viewed these free-skiers as just a little bit laidback and they had the baggy pants that were so low,” Wilson said.

“There was an attitude about them that was really different, that they were a little bit rebellious and all of that, but I’m hoping now that people really see the precision, the skill set, the talent that’s required to be doing what they’re doing.”

Currier, for instance, is known for double-cork switch 1080, one of the toughest tricks in the pipe, and all three do the double-cork 1260, which includes two backflips while rotating three and a half times over the halfpipe.

“The addition of slopestyle and halfpipe skiing in the Olympics is really going to boost the competition,” Currier said in his U.S. Ski Team profile interview. “I can’t wait to see the level everybody is going to be skiing at.

“As far as my own personal goals, I would be lying if I said Olympics are not the highest priority, but I’m really going to focus on being in the best shape I can be in, having as much fun as possible and staying uninjured in the process.”