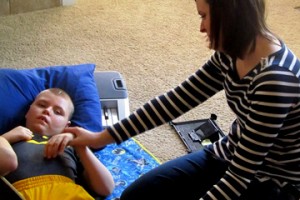 An international team of scientists, including University of Colorado School of Medicine and Children’s Hospital Colorado researchers, has discovered a new disease related to an inability to process Vitamin B12.

The disorder is rare but can be devastating.

More to the story

The discovery is important because it could help doctors diagnose the disease and, eventually, could lead to prevention or treatment. But there is more to the story than that.

A 9-year-old Colorado boy named Max Watson, who because of his metabolic disease uses a computer to communicate, was the first patient in whom this discovery was made.

His older sister Abbey, 15, volunteered in the CU lab that helped achieve this medical breakthrough.
His parents cooperated with the study knowing that the results likely would not help their son but might help future patients. 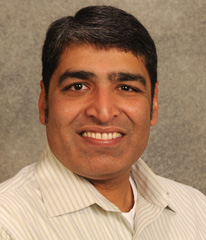 University of Colorado researcher Tamim Shaikh PhD, is a senior author of a paper about the new disease.

The discovery, published today in The American Journal of Human Genetics, illustrates the complex and relatively new realm of medical discovery where researchers peer into the genetic make-up of patients to discern what went wrong to cause a disease.

Obtained from foods such as milk, eggs, fish and meat, B 12 is essential to human health because it helps the body convert food into fuel. It’s vital to the nervous system and for making red blood cells.

Max was born with symptoms that looked like he had a B 12 problem called cobalamin C deficiency or cblC for short, which, like its newly discovered counterpart, can show up in utero.

The gene for cblC had been discovered by researchers who studied several hundred patients with similar symptoms. A few of those patients, however, did not have the genetic mutation that that was common to the cblC patients. And some, like Max, had symptoms that didn’t quite match up.

“We knew from early on that something was unusual about this patient,” says Johan Van Hove, MD, a CU medical school professor in the Department of Pediatrics, who saw Max when the boy was just a few months old.

Max was labeled as having cblC – but Van Hove and others on a team of metabolism experts at Children’s Hospital Colorado had their doubts. Some of Max’s symptoms seemed too severe for that diagnosis.

So Shaikh, an associate professor in the medical school’s pediatrics department, and CU colleagues, used what is called next generation genetic sequencing to delve into Max’s DNA. They also looked at genes of patients who didn’t fit the cobalamin C model, obtained from partners at the National Institutes of Health, and in Canada and Switzerland.

All of those patients carried mutations that hadn’t been identified before. The problem was due to flaws in a gene designed to control the workings of an enzyme that, in turn, helps the body metabolize B 12. The article gives a name to Max’s disease – cblX — because the gene is on the X chromosome.

“This discovery will lead to the correct diagnosis of this serious genetic disorder and will change the way that genetic counseling is given in these families,” says study co-author David Rosenblatt, MD, with the Research Institute of the McGill University Health Centre. “It also helps explain how vitamin B 12 functions in the body, even for those without the disorder.”

The research moves matters to a new phase, Van Hove says, because “if you have some idea about how the system works, that is the beginning of providing more logical treatment.”

The next step, Shaikh adds, “is to determine how mutations in the gene lead to the symptoms seen in patients with cblX in hopes of better understanding the disease and – some day – being able to head it off or treat it.”

For Shaikh, the discovery has meant more than solving a genetic puzzle.

“Laboratory researchers like me don’t normally get to meet the people affected by their research. It’s been a privilege to meet the Watsons,” he says. “They are an amazing family.”

When Max’s sister Abbey – a star athlete — visited the lab investigating her brother’s disease, Shaikh and his team embraced her curiosity and let her join the quest. Max’s mother and father, Deana and Steve Watson, grateful to Children’s hospital for the care Max received and to CU for leading the research, have done whatever was needed to support the project.

But it hasn’t been easy and the discovery doesn’t alter Max’s condition. Max needs full assistance in all aspects of daily care, including a specialized wheelchair and devices to help him stand and move to a bed. Unable to be in a classroom, he attends school via live internet – to the delight of classmates who talk with him on the screen and know his favorite color is yellow.

“We’re pretty realistic about all of this,” Deana says. “The whole reason we have from the beginning agreed to any sort of studies is that maybe some day, with Max’s findings, another family won’t be in this situation. We’re OK with that and proud Max is playing a part with that.”