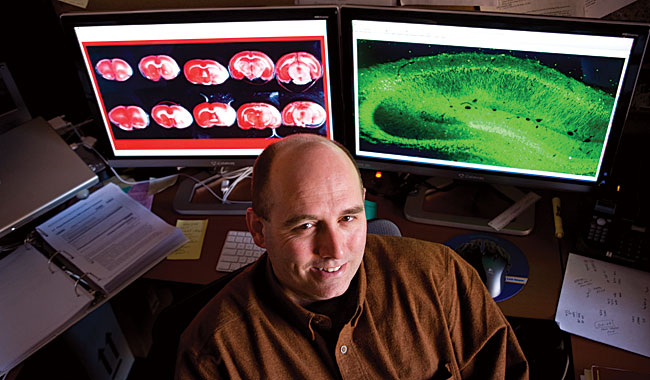 Dr. Dave Poulsen has received a US Army grant to further his research on a drug to treat traumatic brain injuries. (Photo courtesy University of Montana).

Researchers in Poulsen’s lab have shown that low doses of methamphetamine given to rodents within 12 hours after a traumatic brain injury or stroke significantly reduce brain damage and impairment. The Army grant will advance preclinical development studies of the drug in preparation for Phase I/II human clinical trials.

“The military eventually wants a drug that can be administered to soldiers exposed to blast-force energy waves from explosions such as those experienced by soldiers in Iraq and Afghanistan,” said Poulsen, a research professor in UM’s Department of Biomedical and Pharmaceutical Sciences. “Such therapies would be applied within hours of exposure to a significant blast.”

Poulsen already had earned a $1.5 million Army grant in 2011 to determine the lowest effective dose and therapeutic window that the drug can be administered following a moderate or severe traumatic brain injury. The award also examined the potential for low-dose methamphetamine to prevent or reduce post-traumatic epilepsy. Poulsen’s lab determined that effective doses were similar to those used to treat ADHD in children.

More funding may be on the way. In June, Poulsen was invited to submit a $6 million funding application to the Joint Warfighter Medical Research Program. If successful, this award would support a human Phase I/II safety study in patients who have received traumatic brain injuries. The work would be conducted at Brooke Army Medical Center in San Antonio.