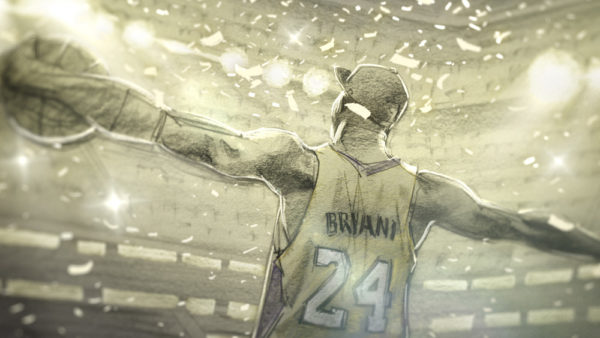 The Vail Valley got a much-needed blast of winter snow during the Oscars Sunday night, but the awards themselves provided a somewhat painful blast from the past when former Los Angeles Lakers’ superstar Kobe Bryant won Best Animated Short for the “Dear Basketball” film he wrote when he was retiring in 2015.

It’s been nearly 15 years, but many in the Vail Valley still remember Bryant’s ill-fated stay at the Lodge & Spa at Cordillera while he was in town for surgery in 2003. Bryant was accused of rape by a teenage hotel worker from Eagle, although charges were later dropped when she refused to testify. Instead, Bryant settled a civil case brought by the alleged victim.

So to see the five-time NBA champion onstage at the Oscars, paying tribute to his wife and three daughters on a night dedicated to the anti-sexual-harassment movements #MeToo and #TimesUp, was jarring for many – especially those of us who still recall the media circus surrounding his rape case here in Eagle County.

I wrote this remembrance six years after the fact when Bryant and the Lakers were taking on the Denver Nuggets in the NBA playoffs – noting that the “Pre-trial of the Century” wound up costing Eagle County taxpayers more than $200,000.

And I explored many of the themes of racial tension, stardom and sexual misconduct in this Aug. 14, 2003, article for LA Weekly. So many of those issues are front of mind today with a robust harassment debate in the Colorado Legislature and a celebrity president in the White House who infamously claimed on tape that you can sexually abuse women if you’re a star. Donald Trump got elected anyway, and Bryant is now an Academy Award-winner. Here’s that LA Weekly piece from 2003:

EAGLE, Colorado — As the buzzards circle it’s only about 10 miles from the gated confines of Cordillera to the working-class town of Eagle. Viewed through the satellite-fed frenzy of the Kobe Bryant case, though, the two places are worlds apart. Like Brentwood and Van Nuys. And on the Vail Valley floor, just 1,500 feet below Cordillera, is Eagle County’s East L.A.: the Eagle River Village trailer park.

That’s where resort workers — the maids and dishwashers who run places like the posh Lodge & Spa at Cordillera — are packed a dozen to a double-wide, working the jobs ski bums no longer take and sending their hard-earned cash back to Monterrey, Chihuahua and Durango. Latino laborers, most illegal, flooded the valley in the go-go ’90s when modern robber barons like WorldCom’s Bernie Ebbers, Tyco’s Dennis Kozlowski, and Adelphia’s John and Timothy Rigas bought and built third and fourth trophy homes in gated mountain enclaves like Beaver Creek, Bachelor Gulch and Cordillera.

After a decade that saw one local real estate company average close to a billion dollars a year in sales, the cultural landscape of the ski town of Vail and the surrounding area had been forever altered. Real estate is king, dirt pimps rule the day, and snow sports are an afterthought — a value-added amenity to help sell ski-in/ski-out starter castles. Meanwhile, the number of Latinos in Eagle County, according to the 2000 census, grew to 9,682, or 23.2 percent of the population.

A 19-year-old Eagle woman working a summer job as a concierge at Cordillera claims Bryant sexually assaulted her at the hotel June 30, the night before he was to have knee surgery at Vail’s Steadman Hawkins Clinic. The married 24-year-old Bryant tearfully admitted to adultery, but says sex with the young, white graduate of Eagle Valley High School was consensual. The single charge of third-degree sexual assault filed July 18 sparked a global media circus that has caught a normally carefree community deerlike in the headlights of intense scrutiny on issues ranging from rape to drugs to race. Race in particular, like in L.A., is an issue that teeters along the socioeconomic divide.

“Definitely there is racism in this area, and this [case] brings a lot of attention to the situation,” local businessman and Latino advocate Hector De La Rosa says of the rape case against the Lakers superstar guard. “That’s the only good thing that comes from this.”

A 15-year-old racial-profiling lawsuit against the Sheriff’s Department for traffic stops on Interstate 70 has been dredged up by the media as evidence of ingrained bias in a cultural backwater where a fair trial for Bryant will be impossible.

“I had people telling me it’s only a matter of time before they bring that up and do the whole Mark Fuhrman thing,” 20-year former Sheriff A.J. Johnson says of the suit the county ultimately settled for $800,000 in 1996. Johnson hotly denies his home of nearly 30 years is a racist place, and still maintains that the suit — brought by the ACLU on behalf of black and Latino motorists who constituted nearly all of the stops made by the Sheriff’s Department over a two-year-long attempted crackdown on drug smuggling — was bogus, because the federally funded program used criteria aimed at spotting drug traffickers, not minorities.

James Johnson, a two-term county commissioner who pushed for the settlement to save money, says he is living proof of the county’s overall climate of tolerance. An African-American, Johnson beat out the head of the county’s largest real estate firm to win his first term in 1992, and was elected a second time four years later despite revelations that he was convicted of cocaine possession when he was working as a housekeeper in Vail in the early 1980s.

Johnson says he wasn’t racially targeted by Vail police but was just in the wrong place at the wrong time — busted when the ski town finally decided to crack down on rampant cocaine use. The Vail Valley, where the latest census recorded just 142 black residents (0.3 percent of the population), is a great place to live, Johnson says, if you’re black or white.

“For some people to exhibit their prejudice, there needs to be a critical mass of individuals, and therefore I saw greater racism directed toward the Latino population than what I felt as an African-American,” Johnson says.

But fifth-generation Mexican-American Debbie Marquez, co-chair of the local Democratic Party and part owner of a Mexican restaurant, argues it’s not bad for Latinos: “We have our bubbas in this county, but I’d like to think Eagle County would offer a fair trial because, with the exception of the [lack of a] black population, we have a fairly diverse, well-educated community.”

De La Rosa, though, has his doubts about local justice. “I know this judge [Fred Gannett], and I know a couple of other judges in this town,” De La Rosa says. “I don’t think [Bryant’s] going to have a fair trial in this county.”

Contractor Anthony Aiello, an outspoken critic of illegal immigration and local law enforcement, disagrees: “I think he can get a real fair trial in this county. If the illegals can get away with all that they get away with, then Kobe can definitely get away with this, just like O.J. got away with two murders.”

Meanwhile, the century-old ranching town of Eagle, 35 miles “down valley” from Vail, has done a booming business catering to the 24-hour news cycle, selling out motel rooms and party tents. Its 3,500 residents are mostly professionals and resort workers who can’t afford the rarefied airs of Vail, which is sparsely populated with nearly 80 percent absentee homeowners.

Eagle residents, pragmatic denizens of the county seat, profess their disgust at Cirque du Kobe while simultaneously cranking up their cash registers. Bryant’s next hearing is scheduled for October 9, with his trial expected to begin later in the fall — if Bryant’s attorneys don’t seek a change of venue.

The broader economic implications for Vail Resorts, owner of the most popular single-mountain ski area in North America, are unclear. California is Vail’s fourth largest out-of-state market, and the ski company is in negotiations with American Airlines to continue direct flights from LAX to the Eagle County Airport next ski season. Resort officials have distanced themselves from the fray, professing obliviousness in the face of a rising tide of venomous e-mails from enraged Kobe fans, some threatening boycott. And despite a reputation for coddling celebrity and keeping them off the radar screen rather than celebrating them Aspen style, Vail may already be a less attractive destination for the rich and the famous. Even before the Bryant debacle, Frank and Kathie Lee Gifford sold their Cordillera home for $7.7 million in 2000 because they were tired of rubberneckers.

Vail Mayor Ludwig Kurz is not concerned: “We’ve treated [celebrities] very well for 40 years, and I think we’ll continue to.”

Ski instructor Julie Cunningham disappears from Vail on March 15, 1975. Just before his execution on January 24, 1989, mass murderer Ted Bundy confesses to a Vail police officer that he lured Cunningham to his car with the ploy of needing help as he fumbled with his ski boots while struggling on crutches. Bundy says he buried her body near Rifle, but it has never been found.

Four people die and eight are injured when two gondola cars derail because of a frayed cable and fall to the ground on Vail Mountain on March 26, 1976.

Spanish Prince Alfonso de Bourbon is nearly beheaded January 30, 1989, during the World Alpine Ski Championships at Beaver Creek after skiing into a cable used to suspend finish-line banners at the bottom of the men’s downhill course. He dies instantly, and the tragedy is covered by the worldwide media in town for the ski races.

While on a routine training flight in Arizona on April 2, 1997, U.S. Air Force Captain Craig Button breaks out of formation, flies 495 miles without any communication and slams his A-10 Warthog into the side of Gold Dust Peak south of Edwards. The Air Force calls the crash a suicide, and Button’s mother accuses them of a cover-up. The plane’s four 500-pound bombs have never been found.

On April 20, 1997, the final day of the ski season on Vail Mountain, Vail Resorts employee Nathan Hall skis down Riva Ridge at a high rate of speed, loses control and slams into Allen Cobb of Denver. Cobb is killed by the edge of Hall’s ski, which sails through the air like a missile. An Eagle County jury on November 16, 2000, finds Hall guilty of criminally negligent homicide in a case that goes all the way to the Colorado Supreme Court and sets a ski-industry precedent. Hall is sentenced to 90 days in jail.

Still thought to be the worst act of ecoterrorism in the history of the United States (perpetrated in the name of the tuft-eared Canadian lynx), seven separate arson fires rip through structures and chairlifts on Vail Mountain in the early-morning hours of October 19, 1998. The fires cause $12 million in damage, including leveling Two Elk Lodge, but no suspects have ever been named and no arrests have been made.