“The fracking ban votes reflect the genuine anxiety and concern of having an industrial process close to neighborhoods,” Hickenlooper said in a prepared statement in the wake of Broomfield’s narrow passage Thursday night of a fourth so-called “fracking ban.”

Fort Collins, Boulder and Lafayette voters passed similar bans by much wider margins earlier this month, but Broomfield’s vote was so close (10,350 to 10,333) that it will trigger an automatic recount as early as next week. 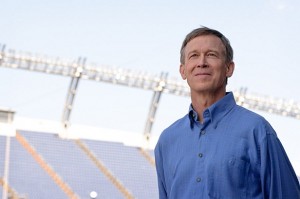 Hickenlooper added that mineral rights need to be protected and that the four communities can work with the state’s chief regulatory agency, the Colorado Oil and Gas Conservation Commission (COGCC), to mitigate environmental and health concerns.

“Local fracking bans essentially deprive people of their legal rights to access the property they own. Our state Constitution protects these rights,” Hickenlooper said. “A framework exists for local communities to work collaboratively with state regulators and the energy industry. We all share the same desire of keeping communities safe.”

Gary Wockner of the environmental group Clean Water Action said the clean sweep by all four communities should be a “wake-up call” for Hickenlooper – one that precludes further legal action by the state and the industry resulting from past fracking bans.

“If Gov. Hickenlooper actually thinks he can address this outcry by suing over 300,000 citizens in all four of these Colorado cities, he’s completely out of touch,” Wockner said in a statement. “Hickenlooper needs to dramatically change course and find a cooperative path forward that respects the vote and will of the people.”

Hickenlooper did not say if the state will file additional legal action.

“These bans may or may not result in new legal challenges from mineral rights holders, individual companies or others,” Hickenlooper said. “No matter what happens we won’t stop working with local governments and supporting regulations that can be a national model for protecting public health and safety.”

Industry representatives called the close tally in Broomfield – “the only true swing community” voting on the issue – an election result that changed the dialogue in favor of oil and gas drilling proponents.

“In a very tight race, Broomfield voters demonstrated that they’re concerned about extreme energy bans,” Tisha Schuller, president and CEO of the Colorado Oil & Gas Association, said in a statement on Friday. “In Round 1, we significantly changed the dialogue about Colorado’s energy future. Round 2 starts today. We will continue until we put an end to the misinformation that ban-supporters have been spreading for years.”

Fracking ban proponents for the grassroots group Our Broomfield claim to have been outspent 25-to-1 by the industry.

“The common-sense voters of Broomfield, a good representation of the mainstream values of all Coloradans, believe that fracking should not take place in our community unless it can be definitively proven safe,” Our Broomfield’s Nate Troup said in a statement. “Our true swing community unofficially approved a sensible, balanced approach to addressing the threat of this industrial process.”

Hydraulic fracturing, or fracking, involves the high-pressure pumping of thousands of gallons of water, with some sand and small amounts of undisclosed chemicals, deep underground into oil and gas wells to crack open tight geological formations and free up more oil and gas. Fracking occurs in more than 90 percent of all oil and gas wells in the state.

Industry backers claim the process is largely safe and has opened up vast new reserves throughout the state, but critics argue the process can lead to the contamination of water supplies and cause unhealthy air emissions near large population centers.