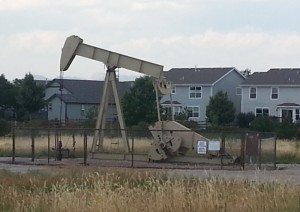 As gas and oil drilling are reaching all-time highs in Colorado, drilling is occurring closer to schools and residential neighborhoods, like this one in Fort Collins. Photo by David O. Williams.

A former president of the Colorado Medical Society calls the current hydraulic fracturing boom in the state’s oil and gas industry an “experiment in motion” for the public at large – one that could lead to higher rates of cancer and other illnesses over the next 10 to 15 years.

Dr. Michael Pramenko, a Grand Junction family physician, says he isn’t as worried about acute cases of exposure to carcinogens in “fracking” fluid – although he has treated a patient who accidently guzzled cancer-causing benzene. Pramenko says he is more concerned with long-term exposure from tainted water.

“Are there people out there being exposed to low quantities [of carcinogens] that we won’t ever know about? Sure,” he said. “Are there going to be some cancers down the road that come about across the United States? I think that’s true.”

Natural gas production in Colorado has risen to all-time highs, and oil production has reached the highest level since 1957 – mostly due to the huge Wattenberg Field northeast of the Denver metro area. Spills of tainted water and toxic chemicals such as benzene are also on the rise.

During an eight-month period in 2011, companies spilled 2 million gallons of fluids, which state officials say was just one-twentieth of one percent of the 10 billion gallons of fluids the industry handled during that time. Officials acknowledge there are up to 400 oil and gas spills each year in Colorado, but they say only 20 percent contaminate groundwater.

FracFocus, a chemical disclosure registry, lists many of the chemicals currently being used in hydraulic fracturing operations in Colorado.
Oil and gas companies do not always disclose their specific fracking recipe, but FracFocus reports that the average “frack job” in shale gas plays in the United States is 99.2-percent water. The other .8 percent can be made up of a wide variety of substances – some of them toxic.

In 2011, a U.S. House Committee on Energy and Commerce report [pdf] listed the 14 most common “known, probable or possible” carcinogenic (cancer-causing) substances found in hydraulic fracturing fluid between 2005-09:

Formaldehyde: Found in building materials and numerous household products. Can cause burning sensation in eyes and throat, nausea, difficulty breathing and asthma attacks.

Benzene: A petroleum-based chemical found in gasoline, diesel fuel, industrial solvents, paint, lacquer and varnish. Can cause rapid heartbeat, shallow breathing, nausea, vomiting and convulsions. Long-term exposure can lead to acute myelogenous leukemia (AML), which is a cancer of the blood-forming organs.

Di (2-ethylhexyl) phthalate: Used as a plasticizer in PVC and other polymers, including rubber, cellulose and styrene. Long-term exposure can cause cancer, liver and reproductive problems.

Acrylamide: Widely used in the manufacture of papers, dyes and other industrial products. Can cause abdominal pain, weakness, drowsiness, seizures, tremors and cardiovascular collapse.

Acetaldehyde: Used in the production of plastics, mirrors, varnish, disinfectants and other products. Can cause low blood pressure, slowed heart rate, bronchitis, fluid in lungs.

Ethylene oxide: Used as a sterilant for health care materials and in the manufacture of detergents, plasticizers and cosmetics. Can cause dizziness, drowsiness, weakness, seizures.

Lead: Naturally occurring metal once common in paint and gasoline. Can cause infertility, muscle and joint pain, nervous disorders in adults, anemia, muscle weakness and brain damage in children.

Propylene oxide: Used in the production of polyurethane foams. Can cause eye and respiratory irritation, skin irritation and necrosis and mild depression of the central nervous system.

Many of the spills are directly or indirectly the result of fracking, in which millions of gallons of water and “trace” amounts of sometimes toxic chemicals are injected under high pressure into oil and gas wells to break open tight geological formations and free up more hydrocarbons.

Boulder attorney Corey Zurbuch this month argued a case before the Colorado Court of Appeals pitting a Western Slope family against Denver-based Antero Resources. The Strudleys of Silt Mesa, near Glenwood Springs, claimed a nearby gas rig forced them from their home in 2011 by fouling their water and air and causing severe rashes, nosebleeds and blackouts.

Their case was dismissed before the discovery stage, Zurbuch argued, without the company fully divulging what chemicals they used, whether any spilled and if there were problems with the well. A ruling is still pending, but Zurbuch says such litigation will become more common as drilling moves closer to schools and homes in populated areas of the state – and that physicians need to become more aware of the symptoms of exposure.

“The panoply of symptoms that you can get if you’re living near one of these [rigs] – you’re being subjected to air pollution, pollution from the increase of diesel trucks, the pollution directly off the wells, and you may have water contamination,” Zurbuch said.

Depending on the chemical, symptoms can range from vomiting to gastrointestinal pain, seizures, dizziness, drowsiness and weakness. (See list of chemicals commonly used in fracking at right.)

Tainted water sometimes leaks from holding ponds and pipelines, and on occasion has contaminated nearby drinking water wells in rural areas. Major spills also occurred at a Suncor refinery north of Denver in 2011 and at a Williams gas plant near Parachute on the Western Slope this year. Both spills resulted in benzene levels higher than federal limits for safe drinking water in Sand Creek and the South Platte River (Suncor) and Parachute Creek (Williams).

However, Colorado Department of Public Health and Environment (CDPHE) spokesman Mark Salley said the spills have not posed a risk to public health.

As for the cumulative effects of carcinogenic substances from so many spills around Colorado each year, Salley said the department closely monitors the industry to protect public health: “The [CDPHE] has regulations in place, including required permitting, set-back requirements, use of ‘best practice’ methods by industry to minimize the impacts.”

But critics such as Conservation Colorado Executive Director Pete Maysmith say both the industry and state must do more, especially as drilling increases near schools, parks and homes on the Front Range. “As more and more drilling moves closer to communities and neighborhoods, there is going to be an increased call for stronger protections, and that’s completely to be expected,” he said.

There are 50,771 active oil and gas wells in Colorado – 20,260 of them in Weld County on the northern Front Range. More than 90 percent of the state’s wells are fracked at least once and often multiple times.

A congressional report in 2011 found benzene was one of 14 known, probable or possible carcinogens used in fracking fluid formulas in Colorado and several other states by 14 leading oil and gas service companies between 2005 and 2009.

One of the most common industrial chemicals, benzene is also used in gasoline, diesel fuel, industrial solvents and paint. Long-term exposure can lead to acute myelogenous leukemia (AML), which is a cancer of the blood-forming organs.

That’s alarming to Pramenko, who is particularly concerned about rural areas where drinking water often comes from domestic wells near drilling operations. Pramenko treated Ned Prather, a DeBeque rancher and outfitter who five years ago accidentally ingested a glass of benzene-laced water from his drinking well the state later said was fouled by a nearby Williams rig.