Colorado schools are reacting in a variety of ways to the most recent high school massacre Feb. 14 in Parkland, Florida, and Colorado Attorney General Cynthia Coffman has reached out to her counterpart in Florida to offer condolences, resources and information on Safe2Tell – Colorado’s statewide school safety bystander-reporting program.

“Unfortunately, Colorado understands, as perhaps few others can, the complicated challenges Florida faces in the wake of this profound tragedy,” Coffman said in a press release. “One of the most successful tools we developed in Colorado after the Columbine High School shootings [in 1999], is our statewide school safety bystander-reporting program, Safe2Tell. We will work with Florida as they implement a similar school safety program to empower their students.”

Warning calls to both the FBI and local law enforcement failed to stop a 19-year-old expelled former student from using an AR-15 assault rifle to kill 17 people at Marjory Stoneman Douglas High School in Parkland, Florida, on Valentine’s Day. Survivors have been demanding gun-law reform, but Congress so far has not considered any new legislation.

This despite President Donald Trump on Wednesday telling members of Congress not to be afraid of the lobbying might of the National Rifle Association, which opposes most new gun laws – including universal background checks supported by the vast majority of Americans.

The NRA, which contributed approximately $30 million to help get Trump elected in 2016, pushed back on the president’s apparent openness to new gun laws late Thursday, saying after an Oval Office meeting that Trump does not really want stiffer gun-control legislation.

Lost in the heated rhetoric over gun-law reform is the fact that the most recent high school shooter appears to adhere to alt-right extremist views – making racist statements in online chatrooms and going so far as to profess his desire to become a professional school shooter.

Law enforcement officials failed to act on those warnings, and some experts say white nationalist hate groups are being largely ignored in this country despite the fact they’ve caused more deaths in the United States the last 10 years than Islamic extremist groups that garner more attention.

There’s little historical support for unfettered gun ownership in the United States, according to scholars who study the issue, and recent polls show most Americans support the concept of making it much more difficult for young, impressionable and sometimes unstable Americans to purchase military-style assault weapons designed to kill as many people as possible.

In the meantime, the question of how to report such people in order to prevent future tragedies remains an open one. School officials urge people to contact law enforcement.

“The security and safety of all of our students is our top priority, which includes learning about and investigating any safety concerns reported by students or families,” said Tammy Schiff, chief communications officer for Eagle County Schools. But she added privacy laws prevent the district from discussing disciplinary issues or commenting on rumors.

“The district shares information that is factual, respectful of privacy, and appropriate based on any given circumstance or incident,” Schiff added. “The safety and security of our schools, students and staff are a top priority. We do not share unconfirmed information and cannot share information related to an investigation by law enforcement or information about specific students at any time.”

The Eagle County Sheriff’s Office found an incident at Eagle Valley High School last month was not a security threat, and Battle Mountain High School officials say they have resolved a school threat made last spring right before graduation. Summit County officials recently held a community meeting to deal with a possible out-of-state online threat at that high school.

According to one parent of a local high school student who asked not to be identified, parents and students are on edge, and a lot of it has to do with a perceived lack of communication.

“We never get a general concern letter, and they let the rumors fly and then waste time fielding frantic parent calls,” the parent said. “When are we going to get tired of picking up the pieces of broken glass and start thinking about preventing the glass from breaking in the first place?

“The school knows what the rumors are, yet they do not give us any sort of factual information that we can use to actually have conversations with our children. Our kids are hurt, and they are afraid.”

Privacy laws seem to trump transparency when it come to school safety, the parent added.

“When we do call the school, we get the privacy line – even when it relates to our own children being victims,” the parent said. “And we get no information, other than, ‘It has been dealt with and the students have been disciplined.’ They won’t even tell us what the discipline is. I don’t even involve them anymore; I go straight to the police.”

Safe2Tell allows for totally anonymous reporting of suspicious or threatening behavior, with no caller ID, no call tracing, recording or forwarding. Call toll-free (877) 542-7233 24 hours a day, seven days a week, make a web tip, download the Safe2Tell mobile app on the Apple App Store or Google Play. The anonymity of all Safe2Tell reports are protected by Colorado law. 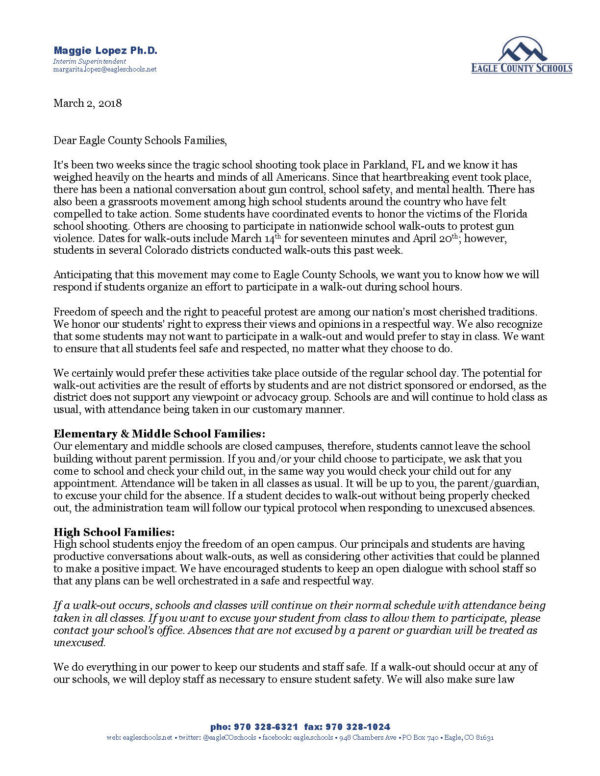