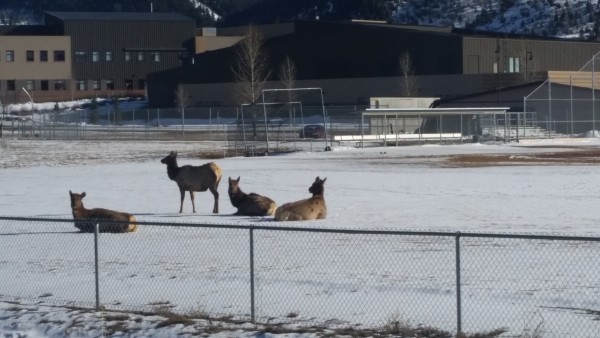 No Huskies in sight, Elk got more use out of the Battle Mountain baseball field in March.

Friday morning well before the first pitch in the Colorado Rockies home opener I wrote a blog for RealVail.com lamenting the team’s lack of pitching and bemoaning the fact that the Monforts never spend a dime on quality pitching even as the rest of their divisions loads up in free agency. The Trevor Story story is just another example of explosive offense that will distract Rockies fans from the reality that we have no pitching and therefore no hope.

Then the game starts and the San Diego Padres, a team struggling mightily at the plate and coming in on a record three-game scoreless streak to start the season, proceeds to explode for 13 runs, exposing the Rockies awful pitching and making two more home runs from Story an interesting side note in a 13-6 loss.

As if to underscore my point even further, two other teams in the National League West, Los Angeles and San Francisco, battled into extra innings Friday, with the Giants prevailing 3-2 over the Dodgers — a much more reasonable baseball score. And the Dodgers had a rookie pitcher take a no-hitter into the eighth inning. Wow.

Anyway, here’s the blog I posted Friday on Real Vail:

Colorado will never be a great baseball state. It’s too high, so balls carry way too much off bats, and the air is too thin and dry, so balls don’t move enough for pitchers. Therefore, you will always have the inflated softball scores of Coors Field, and good pitchers will always want to avoid the place like the plague while hitters will want to flock here the way the Kardashians hit Rocky Mountain Chocolate Factory in Vail this week.

Factor in the fact that baseball starts when ski season often is still in full swing (opening weekend at Coors is supposed to be rainy and maybe even a little snowy), and you have less-than-ideal conditions for contesting America’s past time in the Centennial State.

Nevertheless, I’m a huge Colorado Rockies fan. I voted to tax myself for Coors Field and to bring the Rockies to town as a Denver resident in the late 80s and early 90s. I was in the press box for their first game at Mile High Stadium in 1993. I find offensive baseball wildly entertaining, even though I know we’ll never win a World Series that way.

If anything, the gold standard for team ownership in Denver, the Bowlen family and GM John Elway, just showed us that defense wins championships and you have to spend the right way to make that happen. The Rockies have never spent the right way.

Always an offensive juggernaut with above-average fielders, the Rockies consistently come up short in the pitching department, and no matter how great the Trevor Story story is (first rookie in MLB history to open the season with home runs in three straight games), we all know the Rockies will likely be hard-pressed to avoid 100 losses this season because we have no pitching. And the Monforts are unwilling to spend for what the team really needs.

Story may make us forget about former shortstop Troy Tulowitzki but diehard fans will never get past the fact that the Rockies gave Tulo away and didn’t get what they most desperately needed: quality starting pitching that can handle the horrors of the Cape Coors Canaveral launching pad.

Now that I’ve drawn you in with references to the Kardashians, who were in fact in Vail this week and did in fact go to the Rocky Mountain Chocolate Factory, and Trevor Story, let me now transition to the real purpose of this piece: shining a white-hot spotlight on Battle Mountain baseball. First, though, a little more click-baiting: O.J. Simpson, friend and client of Robert Kardashian, also once vacationed in Vail before all of his legal troubles. Now, back to baseball.

If you think it’s tough playing winning baseball at 5,280 feet in Denver, given the altitude and atmospheric handicaps, try doing at 7,200 feet at Battle Mountain High School in Edwards, on a field that until recently was under snow and remains a bit of a muddy mess.

The Battle Mountain Huskies, both in Edwards and at their old field in Eagle-Vail, have been incredibly challenged by both practice and game conditions during their short March, April and early May season over the past 20-plus years. The team has never made the state playoffs.

I don’t want to jinx them, but this season could be different. History could be made.

The Huskies are 4-4 so far, having already played the toughest teams in the Western Slope League, going 0-4 against Delta and Palisade but competing with both powerhouse squads. Battle Mountain also recorded an impressive 6-5 non-league win over Montrose in Eagle last week, won two non-league games over Coal Ridge and one over Basalt.

Now comes the more manageable part of the schedule, where the Huskies need to start getting some key league wins against Glenwood in a doubleheader at home on Saturday, April 9 (11 a.m. and 1 p.m.). Then there’s a league doubleheader at Rifle on Friday, April 15, followed by the in-county rivalry matchup against Eagle Valley with a doubleheader in Gypsum on Tuesday, Aug. 19.

That’s six league games in a row before spring break. If the Huskies win just half of those games, they will surpass last season’s win total of six overall victories (four of them in the league) and be in a position to make the playoffs for the first time in team history.

After spring break (I know, how insane is it that spring break is in late April with basically only a month of school remaining after kids come back?), the Huskies play non-league Basalt on the road on Monday, May 2, followed by a league matchup with Summit in Frisco on May 4, and then a May 7 league doubleheader versus Steamboat to close out the season. Battle Mountain also needs to make up a home game against Summit, which has been snowed out twice.

Realistically, the Huskies need to do better than just split the next six games. If the team can go 8-3 in its final 11 games (10 of them league), it would match the 12 overall wins and come close to the nine league wins that got Eagle Valley into the playoffs last season.

Battle Mountain only won four league games last season (six overall) for a 6-13 record that ranked seventh in the league ahead of only Steamboat. The Huskies also scored just 57 runs last season and gave up 114 in league play (99 and 155 overall). Compare that to 14 runs scored and 30 given up so far in just four very tough league games (48 and 50 in eight total games).

The Montrose team that Battle Mountain beat 6-5 on March 30 in Eagle clobbered Eagle Valley 21-2 in Gypsum this week.

“Honestly, we’ve got a lot of kids who believe as a team,” Huskies manager Jose Meza told Chris Freud of the Vail Daily recently. “It doesn’t matter if we get down early. The fight is there all the time. When we play clean baseball, we’ve got a shot against anybody.”

Relatively competitive 8-2 and 6-4 losses on the road to Delta last weekend would seem to back that up.

“I am excited,” Meza said. “Even today, our 6-4 loss shows how close we are. We feel we can play against the best in the conference, and now we’re going to give it shot against the rest of the league.”

But, of course, weather will be a factor. It’s supposed to rain if not possibly snow on Saturday against Glenwood. So while that’s great if you want fresh snow for closing weekend at Beaver Creek, which will shut down for the season on Sunday with a very solid 60-inch settled base and still 1,200 acres of skiable terrain, it sucks for playing baseball.

However, after one recent snow-out, a lot of the players headed up as a group and hit the slopes. Whether they make the playoffs or not this season, you can always say this about the Battle Mountain Huskies baseball team (several of whom have their names etched on the state championship ski trophy this season), “They are the best skiing baseball team in the state.”