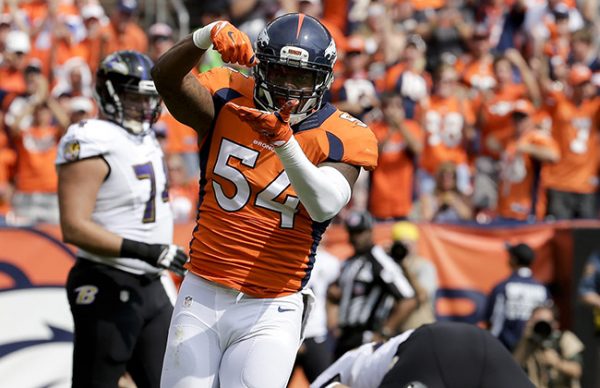 Instead of burning Denver Broncos linebacker Brandon Marshall’s jersey and vilifying him for his ongoing national anthem protest in the name of social justice, I think it’s time we start lauding him for his commendable and highly risky free-speech stance rooted in his desire to affect meaningful and lasting change.

While I respect the national anthem and believe in what I think it stands for, I also know there are plenty of people now throwing shade at Marshall who disrespectfully chat with their neighbors or check their smart phones during the anthem. They never stopped to think about what the anthem stands for until Marshall declined to stand.

So the thoughtful, 27-year-old, fifth-year professional football player really did the only thing he could to make America stop and think about the national disgrace of white police officers disproportionately and way too casually gunning down black Americans.

The very things the anthem honors are being violated on a seemingly daily basis, and white Americans — largely unaffected — continue to just chat with their neighbors and check their smart phones.

Besides honoring Marshall for his courageous stance, we should also boycott the companies that have dropped his endorsement deals — Air Academy Federal Credit Union and CenturyLink. I think it disgraceful that these companies are punishing Marshall for exercising his most intrinsic of American values: free speech for the sake of social change.

I understand policing is a difficult job, and I think pro athletes do too. They aren’t calling out all police – just the trigger-happy ones we see on video after video taking out mostly African-Americans.

Nor are athletes like Marshall, Colin Kaepernick and now Von Miller criticizing the U.S. military or America’s role as a global policeman seeking to end injustice around the world, although perhaps they should be.

Questioning authority is the most basic of American values, and our military has been deployed in some very questionable ways in recent years, relying heavily on poor and minority soldiers to do the dirty work.

White Americans can’t comprehend what African-Americans go through on a daily basis in the United States, and Marshall, who says he was unjustly singled out and handcuffed as recently as this summer in Miami, is being very measured and reasonable in his approach, meeting with the Denver police chief and donating to community causes.

For that he loses endorsement deals while other athletes keep getting paid despite domestic abuse, drug and weapons convictions? Shame on CenturyLink, a company with an absolutely awful service record when I was compelled to use them as a resident of Eagle.

It’s a digression and perhaps separate issue, but I’m disappointed the town of Eagle decided not to ask voters for the right to pursue municipal broadband. The monopoly granted a few Internet providers has allowed them to arrogantly provide terrible connectivity and data speeds while charging outrageous monthly rates in rural areas. The exorbitant cost of ridiculously slow Internet is a national disgrace, though not nearly on par with what Marshall is protesting.

CenturyLink is one of the worst offenders, actually making Comcast look good by comparison, so to see the company’s stance on Marshall is doubly offensive to me, and they ought to be made to pay financially by customers seeking service elsewhere – if only there were more competition and fewer regulatory hurdles.

As far as Marshall is concerned, people burning his jersey at the Broncos practice facility and those making death threats to Kaepernick are perfectly proving the players’ point. There is a double standard in America for how African-Americans and pro athletes are supposed to behave, and the punishment will be disproportionate if white America feels they’ve stepped out of line.

Donald Trump is personally stoking the white American hate machine for his own disgusting purposes, blaming protests in Charlotte on Hillary Clinton. This after offering to pay the legal fees of supporters assaulting black protestors at his rallies.

Trump running mate Mike Pence on Thursday in Colorado Springs implored us all to stop talking about police and institutional racism even though stats show black me are three times more likely to be shot and killed by police than white men. That’s the Trump-Pence solution: just stop talking about it while inciting more violence through bigoted rhetoric.

Anyone who votes for Trump on Nov. 8 will have to answer to the historians at this pivotal point in our national debate over violence, racism, war and social injustice. To me, and hopefully a growing number of white Americans, Marshall is on the right side of history and Donald Trump will fade into obscurity.