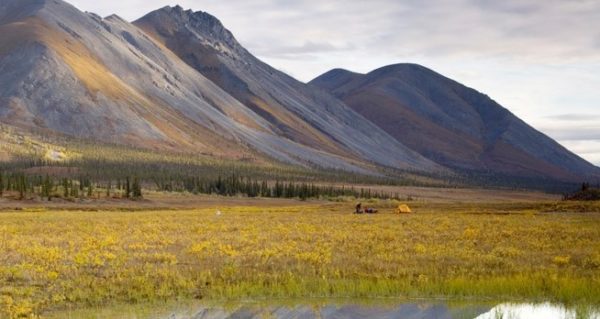 The announcement comes on the heels of the recent National Climate Assessment from 13 Trump administration federal agencies that predicts widespread human displacement and death, as well as economic and ecological catastrophe, if man-made global warming continues unchecked. The report flies in the face of the denials and fossil-fuel-friendly policies of President Donald Trump.

“Our government continues to ignore the seriousness and causes of the climate crisis. It is pure evil,” Patagonia founder Yvon Chouinard said via a spokeswoman on Wednesday. “We need to double down on renewable energy solutions.

“We need an agriculture system that supports small family farms and ranches, not one that rewards chemical companies intent on destroying our planet and poisoning our food. And we need to protect our public lands and waters because they are all we have left,” Chouinard added.

Patagonia CEO Rose Marcario, in a post on Linkedin, did not identify what organizations would receive the $10 million, but she did say the new money will be on top of the company’s ongoing 1% for the Planet annual giving.

“Based on last year’s irresponsible tax cut, Patagonia will owe less in taxes this year—$10 million less, in fact,” Marcario wrote. “Instead of putting the money back into our business, we’re responding by putting $10 million back into the planet. Our home planet needs it more than we do.”

Patagonia, which has been active in public lands issues in Colorado and Utah, labeled the Trump and Republican Party tax cuts a windfall for the oil and gas industry that will open up 19 million acres of the Arctic National Wildlife Refuge for drilling at the worst possible time for the planet.

Colorado Sen. Michael Bennet, a Democrat, has sent out a petition and issued several statements on the latest National Climate Assessment report, including this email blast to constituents on Wednesday:

“Here’s the bottom line: Climate change is an urgent threat to our health, security, and economy. And it’s affecting all of us, right now,” Bennet wrote. “This week, the president has doubled down to deny the findings in the report, which his own administration published, that outline the economic costs of climate change.”

Colorado Sen. Cory Gardner, a Republican, has not yet issued a statement on the National Climate Assessment via press release or social media.

Also in Congress last week, a bipartisan group of lawmakers in the U.S. House for the first time in nearly a decade introduced a bill to impose a carbon tax. The bill has little chance in the Republican-controlled Congress, but its bipartisan nature, with Florida Republicans onboard, underscores a sense of increased urgency in the wake of deadly flooding and wildfires.

The House in 2009 passed a carbon tax and renewable energy bill under the leadership of then House Speaker Nancy Pelosi, who is poised to resume that role in January, but the Senate never even considered the bill.

In other congressional conservation news, 22 members of the International Mountain Bicycling Association (IMBA) flew to Washington late last week to meet with lawmakers to emphasize the importance of fully funding and permanently renewing the Land and Water Conservation Fund.

Congress last fall allowed the expiration of LWCF, which for decades has collected fees from offshore drilling and used them on open space, parks, recreation facilities and other conservation projects across the country. The fund is losing nearly $2.5 million per day since it expired.

“Now that Congress has reconvened after the midterms, permanently reauthorizing and fully funding LWCF must be a top priority,” said Colorado mountain biking legend and now IMBA Executive Director David Wiens. “We are in Washington to let key members of Congress know how important LWCF has been to mountain bikers and our fellow outdoor recreationists, from the trails close to home to the iconic backcountry rides LWCF has helped create.”

Among the 15 congressional offices the mountain bikers will visit are Sens. Gardner and Bennet, Mark Warner and Tim Kaine of Virginia and Maria Cantwell of Washington. The group also planned to meet with Colorado Reps. Diana DeGette, Scott Tipton and Ed Perlmutter. Gardner held a bipartisan rally in support of the LWCF in Washington last week.

“As a mountain biker, I see firsthand LWCF’s impressive roster of trail enhancements and improvements to public lands across the country,” said Chris Conroy, IMBA board chair and president of Yeti Cycles in Golden.

“As a business owner, I appreciate LWCF’s efficient funding mechanism that uses royalties, not taxpayer dollars, from offshore oil and gas extraction to protect natural areas and provide superior outdoor recreation access,” Conroy added. “I am asking Congress to permanently renew LWCF and fully fund it at the authorized level of $900 million without further delay.”