Sliding into ski season with an abundance of caution

In April of 2005, I was “that guy.” The Eeyore on a heli-skiing trip who – while not exactly uttering the Winnie the Pooh character’s famously gloomy “We’re all gonna die” line – did put a serious damper on a day in the Chugach Mountains above Valdez, Alaska.

Our guide that day was the snow safety director at a Utah ski resort. We had just skied a beautiful, 2,500-foot-vertical face of thick, buttery maritime powder and the heli had returned us to the same landing zone. Our guide dug a snow pit and emerged with a worried look on his face. 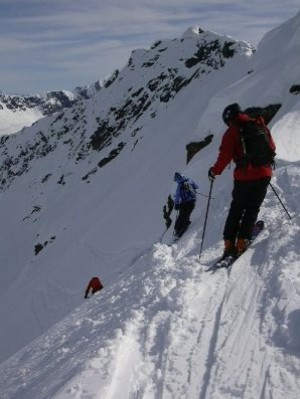 All around us south- and west-facing slopes were naturally ripping free, periodically shattered the overwhelming silence with crashing chunks of icy death. The 40-degree slope we had just skied and were now eagerly eyeing a second time was north-facing, well-shaded and likely good to go. But our guide had his doubts.

The problem was that it was late April. The temperatures were climbing into the 50s in Valdez and upper 30s in the heli-skiing zone. And water weight was being added to five days of fresh snow with each tick of the clock. But our guide left it up to us.

That was shocking to me. Even though we’d paid a day rate of around $700, I didn’t think heli-skiing in the Chugach was a democracy. If the snow-safety guy had his doubts, then in my mind it was a no-brainer. Pull the plug and live to ski another day.

No one else in my group agreed.

That included two chain-smoking Russians, a wealthy dotcommer from Mammoth and a buddy of mine from Vail. So I wound up being “that guy,” telling the guide I didn’t want to ski it. And he flew us off the top and dropped us on lower-angle slopes that were iced over with breakable crust because of the freeze-thaw cycle. My friend and I called it a day.

I relived this little tale at the beginning of last ski season because I had just finished reading one of the best-presented pieces of Internet reporting I’ve ever seen: a special report in The New York Times on the Tunnel Creek avalanche February of 2012 that killed three skiers off the back side of Stevens Pass ski area in Washington State. Then Colorado experienced one of the deadliest springs on record in 2013, including the deaths of five snow riders on Loveland Pass in April.

I lived in Seattle for a year in the mid-1990s and loved the few times I got up to nearby Stevens, a throwback area with great terrain and really good snow. The NYT piece put me right back there and vividly told the tale of 16 hard-charging ski industry folks who went out a backcountry gate despite a lot of nervousness and warning signs and charged into the teeth of a snow dragon.

The just needed one Eeyore that day to speak up and say, “Wait a minute, guys.”

That’s way easier to do when you’re climbing a mountain and weather is rolling in. Gravity naturally wants to send you back down. When there’s unbroken snow in front of you, a lot of testosterone surging through you and a feeling that you’re bulletproof, that’s when your inner Eeyore gets shouted down.

Throw in a few GoPro video cameras, social media, devices like Avalungs and float packs and the overall rising popularity of backcountry skiing, and you have a formula for more and more avy deaths each winter. As I write, there are inexperienced snow riders pushing into Vail’s “side country” to find untracked snow. One or more of them may die this season.

If you read the entire Tunnel Creek story, and I strongly suggest you do, you’ll learn that in the weeks before the avalanche there was a warm period with little new snow followed by a big dump of 32 inches. Ripe conditions for a big slide.

Last season at Vail we had a painfully dry December through the holidays and into mid-January before a big foot-and-a-half powder pasting. Similar conditions to Tunnel Creek in terms of the snow layers bonding – or, more precisely, failing to bond. The big difference is that in Colorado, our interior Rocky Mountain snowpack is much drier and even less stable than the maritime snowpack of Washington or Alaska.

If you recall, that big mid-January dump at Vail last season saw some of the spookiest snow I’ve ever skied in my 30 years of making turns in Colorado. I saw stuff ripping to the ground all over the place out the backcountry gate in Blue Sky Basin that leads to Seibert’s stash. And that was the storm that claimed 13-year-old Taft Conlin of Eagle in an avalanche on lower Prima Cornice.

We’ve had early snow so far this season, followed by warm, sunny days in the 50s and even 60s.

Now we’ve had fairly heavy snow of late with more on the way. Think about that as the more Colorado ski areas open up and so does access to the backcountry , including the notoriously sketchy East Vail Chutes. Two people died there in separate avalanches just a few years ago.

I’m not trying to scare people, because properly educated, equipped and cautious snow riders can and do have a blast in Colorado backcountry every day in the winter months. But until you’ve actually been in a slide, you can’t really appreciate their awesome and utterly lethal power.

When I was 18 or 19, a college freshman at Western State in Gunnison, I used to go out of bounds all the time with a group of friends at Monarch. One time I took a stupid line and broke off a slab that I rode over the snowplow wall and onto Highway 50. Snow packed in all around me on the asphalt as a line of cars and trucks backed up in both directions.

Two friends freed me from the instant concrete that pinned me up to my chest in a sitting position on the highway. All we cared about was skiing away before the sheriff showed up, but later I realized how lucky I’d been, and that experience has forever colored my sense of snow safety. It may have led to my Eeyore moment in Alaska 20 years later.

I wrote about that heli-skiing trip for the Rocky Mountain News in Denver and later reposted on RealVail.com. I didn’t give that seminal moment its proper play in the story, perhaps embarrassed about being “that guy.” The other day, my buddy from Vail – the one who was mad at me for years for pulling the plug – grudgingly admitted I probably made the right call.

Make the right call this season and know when to say no – or at least ski the more conservative line. And if you’re relatively inexperienced in the backcountry but know you want to go this season, attend the Vail and Beaver Creek Ski Patrol’s Avalanche Awareness Series events.

Most of all, don’t be afraid to be an Eeyore.