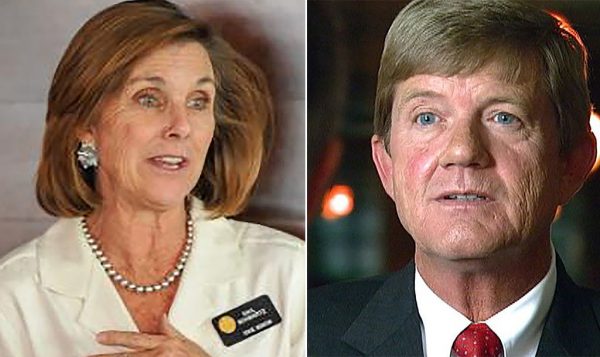 During his six years in Congress, Republican Rep. Scott Tipton has steadfastly opposed a path to citizenship for immigrants illegally living and working in the United States, and now Democratic challenger Gail Schwartz says Tipton is “tying himself to [Donald] Trump” on this key issue.

“Those families are our neighbors. and their children are the valedictorians in our schools,” Schwartz said in recent phone interview. “This is our future. We need to have a path [to citizenship], we need to clean immigration up, we need to have them contributing to our tax base …”

Schwartz, a former Snowmass state senator who now lives in Crested Butte, accuses Tipton of failing to act legislatively to reform the nation’s immigration system and of now supporting Trump’s anti-immigration policies of mass deportations and building a wall on the Mexican border.

“Our immigrants are the underpinning of our hospitality industry, of our hotels, restaurants, construction industry,” said Schwartz, a former ski industry and housing planner. “To have done nothing on immigration – that’s Tipton and that do-nothing Congress – and now to think it’s realistic to ship 11 million people out of this country, how disruptive would that be?”

The Trump mass deportation and border wall rhetoric has struck a chord of fear in some communities on Colorado’s Western Slope, where many resort towns like Vail rely heavily on both immigrant labor and destination tourism from Mexico and other parts of Latin America.

But Tipton has not endorsed Trump for president, instead condemning vulgar comments the Republican made about women while still saying he supports the GOP nominee. A Tipton campaign spokesman did not respond to a request for comment on immigration issues.

“I believe it is important that we continue to welcome those who seek to come to this country legally, but I strongly oppose amnesty or any special benefits for illegal immigrants,” Tipton stated on his campaign website in 2010. “I believe we must secure our borders as a matter of national security.”

And Tipton has not swerved from that position over the years. In 2013, after the U.S. Senate passed a bipartisan immigration reform bill and tried unsuccessfully to get House Speaker John Boehner to call a House vote, Tipton defended his position at a Pueblo town hall meeting by denouncing amnesty and demanding greater border security.

“That wasn’t done when President [Ronald] Reagan tried to fix the problem with an amnesty [in the 1980s],” Tipton said, according to the Pueblo Chieftain.

A year later, Tipton blasted President Barack Obama for trying to use his executive powers to allow up to five million illegal immigrants “to come out of the shadows” and work openly in the country. That move was ultimately blocked by a deadlocked U.S. Supreme Court and remains in limbo.

“I’m working closely with my colleagues in Congress to hold the president accountable, ensure the law of the land is enforced, and advance a solution that will fix the problems within the current immigration system — not brush them aside, as the president is doing,” Tipton said in a prepared statement at the time. That was two years ago, and still no reform measure has passed.

Schwartz said that, if elected, she’ll reach across the aisle to find compromise and affect meaningful change for Colorado’s immigrant workforce. Democratic presidential frontrunner Hillary Clinton has promised action on immigration reform in her first 100 days in office.

“Let’s be respectful of their contribution and the role of immigrants in our communities and our state.” Schwartz said. “We have jobs that go begging because we can’t get the H2A visas in here fast enough for our farms and our agriculture. It’s all at risk [because of Trump. Tipton is] tying himself to Trump, having not done anything on immigration.”

Tipton has tried just as hard to link Schwartz to Clinton and former House Speaker Nancy Pelosi – unpopular figures in some areas of the largely rural and conservative 3rd Congressional District. But throughout what has become an increasingly competitive campaign, Tipton has avoided either condoning or condemning Trump.

That led to a somewhat prickly exchange between Tipton and the Pueblo Chieftain editorial board last month, but the southeastern Colorado newspaper still wound up endorsing Tipton. Schwartz, on the other hand, has picked up newspaper endorsements from the typically conservative Grand Junction Daily Sentinel, the Durango Herald, Tipton’s hometown Cortez Journal and the Glenwood Springs Post Independent.

The Sentinel praised Schwartz’s bipartisanship and willingness to work with Republicans to find moderate solutions to sticky problems: “The 3rd CD needs someone who will roll up their sleeves and fix problems, not blame the other party or other chamber. We think Schwartz leans left far less than Tipton leans right.”