Owners of political newspapers ought to come clean loudly and proudly 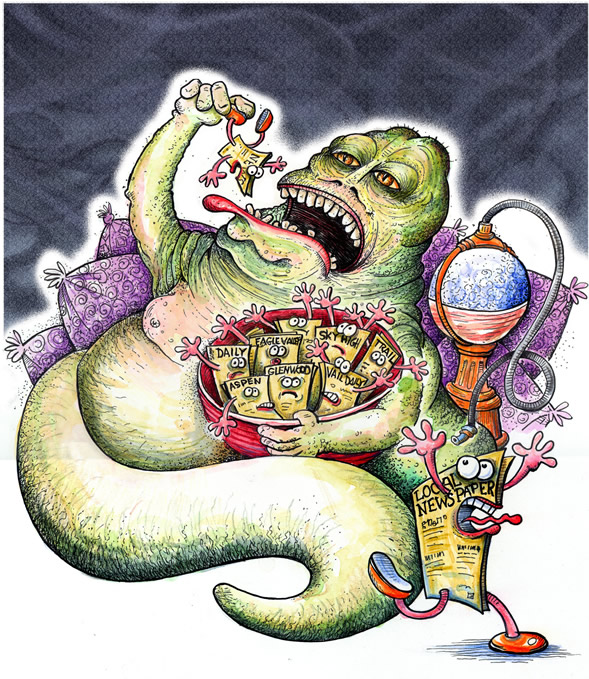 As a print and now mostly digital journalist in Colorado for nearly 30 years, I have more than just a passing interest in who owns the newspapers, magazines and websites I read and write for, and in some ways those owners have helped shape who I am professionally and personally.

For instance, politically conservative ski bum turned millionaire publisher and now restauranteur Jim Pavelich saved me from likely more meaningful employment but also an ink-stained life of servitude in the city when he essentially hired me in the parking lot of Arapahoe Basin in 1991 and named me sports editor of the Vail Daily.

JP, who dabbled on the professional mogul tour at the time, cared more about my skiing ability than my nose for news or ability to produce on deadline. He also didn’t believe in rocking the lucrative ad-sales boat by aggressively covering the news or producing local opinion pieces.

I helped change all of that by getting fired by Colorado Mountain News Media, the company that bought JP’s papers, and then starting a daily version of the weekly Vail Trail to take on the Vail Daily. That forced CMNM to bring in Don Rogers, an editor who started churning out local opinion and generally covering the news more aggressively at the Vail Daily in the late 1990s.

Don has now scurried back to California, so it’s safe to say that even though his company bought out the Vail Trail, shut it down and kicked me to the curb many years ago (to this day hanging its old sign on their building like a trophy buck), I finally wore Rogers down and ran him out of town earlier this year.

And because I own and run my own websites, no one can challenge the veracity of that take – at least in this space.

Over the years I called out Rogers, his paper and his company for a multitude of sins, both real and imagined, including his failure to out those on the right who desperately needed outing. In 2008, I blogged about a blog run by Peter Buckley, the husband of a county commissioner candidate who lost despite the unethically anonymous advocacy of her hubby’s alleged news site.

I jabbed Rogers and the Daily for failing to call out the offending party, and he responded by pointing out I drink my blue Kool-Aid by the gallon. Hard, glug, to argue that point since at the time I wrote for the left-leaning and then murkily-funded Colorado Independent. 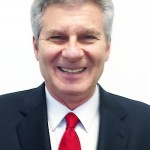 It remains a terribly kept secret that Buckley is the owner and publisher of the right-wing Eagle County Times blog, and no less of an anonymous publishing expert than former Vail Town Council member Michael Cacioppo again “outed” former Avon Town Council member Buckley as the ECT publisher as recently as April.

So if your name isn’t on your publication, in print or online, but everyone knows you’re the owner, does it really matter that you choose to remain anonymous? That’s a good question for Cacioppo, who refers to himself as “Ye Olde Publisher” as he anonymously rips Eagle County and statewide politicians, especially liberal ones, online and in his Business Briefs newspaper.

Cacioppo doesn’t really hide the fact he’s the owner and publisher, admitting as much when he wrote in to the Vail Daily in 2010 to recount in scintillating detail how he saved Eagle from a runaway cow while the local keystone cops (always a favorite target) stood idly by.

And Buckley “outed” Cacioppo in 2012 when he blogged about the “hilarious return of YOP to local politics” after a brief hiatus. Ha, ha, very frickin’ funny. As funny, you might say, as a heart attack – like the ones the Vail Daily detailed in 2014, again describing Cacioppo as the producer of Business Briefs.

These gadflies actually serve a purpose, attending government meetings the rest of us don’t have time for and the Vail Daily doesn’t always have the staffing for, but they “cover the news” with their own conservative agenda, so they ought to put their names on their publications (and please, can someone with the time and money become a local liberal gadfly?).

Relatively harmless, I guess, to “sort of” anonymously produce a newspaper in this day and age of Internet trolls spewing all kinds of nameless bile in the online comments of newspapers, which of course the Vail Daily no longer allows – foisting it all off on Facebook.

But it’s not quite so funny when a relative is running for elected office, or when the publisher himself decides to throw his hat into the political ring, as Cacioppo did back in March. Credit the Steamboat Today newspaper with coming right out of the gate labeling him an Avon publisher when Cacioppo announced his GOP run for Colorado House District 26.

Cacioppo’s Democratic opponent, incumbent state Rep. Diane Mitsch Bush, is from Steamboat, and so it’s no surprise her hometown paper openly revealed Cacioppo’s ownership of Business Briefs while the Vail Daily sort of winks and nods and continues to label him a harmless political gadfly.

I personally feel like anyone running for political office ought to put their name clearly and prominently on anything they write, whether it’s in print or online. In fact, anyone strongly voicing any kind of opinion should put their name on it, especially if they’re pretending to be a journalist, and most definitely if they’re running for the state legislature.

And that person’s hometown newspaper of record ought to be especially vocal in pointing out that candidate’s publishing affiliation. After all, that candidate has a vehicle for campaigning that their opponent does not have, and so the candidate’s name should at least be on the masthead.

My political leanings are clear and my name is all over my websites, RealVail.com and RockyMountainPost.com, and I stand by what I write on those sites, even though I’m not running for political office and I’m not a nonprofit news-gathering publication seeking tax benefits through 501(c)3 status.

I thought Colorado Confidential, which later became the Colorado Independent, did a bad job of being transparent about its financial backing, inadequately listing donors and largely shirking its transparency obligations as a nonprofit news network with a particular political bent. The new version of TCI does a much better job of listing its donors, right down to individual contributors.

When I worked for the website from the spring of 2008 through early 2012 it was an open secret that the site was funded by the state’s lefty elite — Tim Gill, Pat Stryker and, before he was elected to congress, U.S. Rep. Jared Polis, who now represents the Vail Valley and the rest of the 2nd Congressional District in Washington, D.C. It just wasn’t that clearly labeled at the time.

If a newspaper or website is privately owned and isn’t a nonprofit with tax-exempt status, does it have an obligation to clearly state where its money comes from or who its owner is? Not necessarily. But I would say definitely so if that publication is trying to get a particular candidate like Cacioppo elected to public office.

Which brings me to The Colorado Statesman, a publication I occasionally freelance for that has been the subject of intense speculation over the last several weeks about its ownership.

Progressive journalist Jason Salzman runs the Big Media Blog and interviewed me about this story I wrote back in 2008 when he was a media critic for the now-defunct Rocky Mountain News – a story that is no longer online because the Rocky went under in 2009 and no one paid to host and maintain its archive, including Pulitzer Prize-winning and nominated journalism.

I wrote for the Rocky dating back to 1988 and now only have actual newspaper clippings to prove it (a habit I picked up working in the paper’s editorial library while I attended Metro State). But I digress. The topic of maintaining online archives is an important subject for another blog, and my own experience is it’s best to build your own websites and pay your own server costs. Otherwise a paper like the Vail Daily will buy up and shut down an archive like the Vail Trail.

Back to the topic of ownership issues, Big Media Blog’s Salzman recently made a pretty compelling case that conservative Denver businessman Larry Mizel owns the Statesman, although the editor for the long-running Denver political paper won’t confirm Salzman’s suspicions.

Does it matter that Mizel isn’t listed as the owner or at least financial backer? Salzman argues it would be nice to know the paper’s political leanings based on who’s covering the bills, especially now that the Statesman is paying to be inserted in the Denver Post.

Denver’s remaining major metro recently reported that Mizel and his wife co-hosted a fundraiser for presumptive Republic presidential candidate Donald Trump at the Denver home of former Denver Broncos coach Mike Shanahan, a fact widely reported in other publications, including the Statesman. The Post also later reported Mizel is the Colorado fundraising chairman for the Trump campaign, something I haven’t yet seen in the Statesman.

Left-leaning political blog Colorado Pols recently wrote about the implications of Mizel, a prominent leader of Colorado’s Jewish community and a Republican “kingmaker,” supporting and raising funds for Trump despite the reality TV star’s history of questionable comments that prompted the head of the Anti-Defamation League to accuse Trump of inciting “racism and anti-Semitism.” 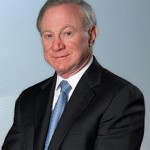 Pols noted that while Mizel is a co-founder of the Simon Wiesenthal Center, “one of the foremost anti-racism and anti-Semitism organizations in the world,” his support of Trump raises serious questions: “Why doesn’t Mizel find it problematic? Because he should. If anybody should, Larry Mizel should.”

Then came the news last week that Carbondale law-school graduate Alex Beinstein, an unsuccessful GOP challenger to U.S. Rep. Scott Tipton in last month’s CD3 primary (a district that includes part of Eagle County), withdrew his affiliation with the Republican Party after recent inflammatory tweets by Trump that were deemed anti-Semitic.

For me, the issue of ownership now raises the question of what Colorado political stories the Statesman is choosing to cover, and what stories the venerable political journal is ignoring.

And if you’re scratching the checks for a publication these days, why not just put your name on it and end the mystery, even if your agenda really is just about getting one person or a group of like-minded people elected to political office? Then let your readers judge whether your reporting is biased based on your agenda or fairly reflects the views of the opposition.

I don’t understand anonymity when it comes to ownership or funding of agenda-driven publications. Proclaim it loudly and proudly, and let the readers be the judges of your content.