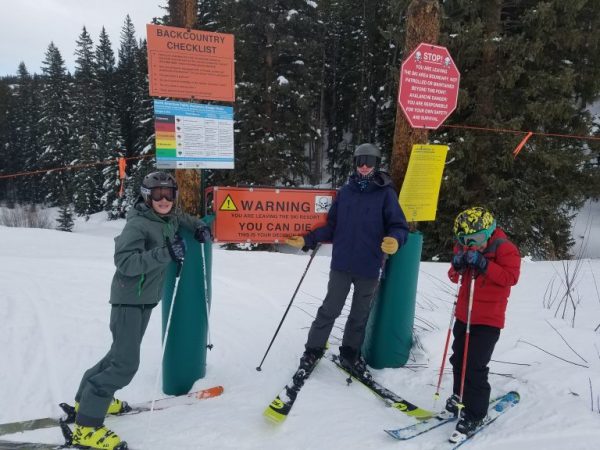 The family that skis together, stays together: Skiing out the Stone Creek gate at the bottom of Rose Bowl in Beaver Creek in January. December and January provided plenty of powder during the 2016-17 ski season, but February and March were very sub-par (David O. Williams).

Colorado did not help elect Donald Trump president, but his surprise victory last month has Colorado native and avid skier Neil Gorsuch on the verge of being nominated to the U.S. Supreme Court. Colorado Sen. Michael Bennet now says he won’t support a Democratic filibuster to block Gorsuch but hasn’t said how he’ll vote. All Coloradans should urge him to vote no for the sake of our environment.

If you live and work in the Rocky Mountains mainly to ski powder during the winter months, as I do, then you’re probably as disappointed as I am in the current ski season, which has largely failed to deliver in terms of the number of high-quality powder days.

During his nomination hearings, Gorsuch told the Senate “the family that skis together stays together.” But the family ski vacation is being endangered by our over-reliance on fossil fuels, and Gorsuch has a record of siding with big business as a federal judge. The man who nominated him is hell-bent on returning the coal industry to its glory days and promoting oil and gas development at any cost, even it means continuing to stoke the furnace of global climate change, which Trump considers a Chinese hoax.

Skiers know there’s no hoax. November was shockingly warm and dry here in Colorado; then a lot of warm, wet storms started hitting the state December through January. That provided enough of a base to carry us through to the spring, but both February and March were incredibly warm and not very snowy.

And this is the first ski season in my quarter century of living in the Vail Valley that it’s rained at least a little every winter month. Those are coastal Whistler conditions not typically seen in the higher, drier and usually much colder Rocky Mountain interior.

At least anecdotally, it’s quite clear the climate is changing in central Colorado. March, once the snowiest and best skiing month of the season, is now the new April. And November can’t really be counted on anymore in terms of a few decent early-season powder days.

My observation is that ski season is shrinking rather rapidly from about five months to more like four, and that rising temperatures in general are making for highly variable conditions even during those four peak months.

In assessing climate change, I know you’re not supposed to look at one ski season as evidence of what greenhouse gas emissions are doing to our atmosphere, but this shortening of ski season has really been a trend for the last decade or more.

In 2005, when I was flying from Anchorage to Cordova to do some heli-skiing in Alaska, I overheard oil and gas workers talking about how the glaciers spectacularly arrayed beneath us were shrinking at alarming rates.

There’s almost as much irony in oil and gas workers being concerned about shrinking ice pack as there is in a skier burning copious amounts of jet and helicopter fuel being so worried about the future of his sport. But I was … and I am.

I know it’s a rather shallow reason for caring about global climate change, but I miss the abundance of cold, deep powder days I used to enjoy when I first moved here in the early 90s, and snow sports are an indicator activity for decreasing snow pack in general.

The ski industry is already adjusting with summer activity programs aimed at monetizing the growing number of warm-weather months, and public land managers and mountain-dwellers in general are now grappling with longer, more intense wildfire seasons.

But everyone from rafting companies to farmers should also be figuring out how to cope with an earlier, less-sustained and generally depleted spring runoff. Those water storage and distribution issues will impact literally every aspect of life in the Rocky Mountains for decades to come — including reducing the amount of available water for everything from lawn irrigation to hydraulic fracturing for natural gas development. Not so mention skiing.

So it was with equal parts amusement and dread that I read Gorsuch’s comments about family skiing during his nomination hearings. I like the sentiment, but I’m suspicious of the substance.

Gorsuch, according to climate-science reporters, is an opponent of the Chevron standard that dictates courts should defer to federal regulators when carrying out ambiguous laws. Obama SCOTUS nominee Merrick Garland, who never even got a nomination hearing, is a strong backer of the Chevron standard and presumably would have supported U.S. Environmental Protection Agency standards regulating greenhouse gas emissions.

Gorsuch, a Coloradan who’s late mother once disastrously headed the EPA, should not be counted on to rule in favor of the agency’s efforts to curtail carbon dioxide emissions largely blamed for exacerbating global climate change.

Trump administration environmental policies in general are likely to dramatically reverse gains Colorado has made in recent years diversifying our energy mix, reducing our over-reliance on coal and increasing the amount of electricity we generate from renewable sources and cleaner-burning natural gas.

The Obama administration’s Clean Power Plan, which would have reduced carbon dioxide emissions from power plants 32 percent below 2005 levels by 2030, is in the process of being gutted by the administration and likely the courts.

Colorado’s Republican attorney general went against the wishes of the governor (and a majority of Colorado residents), suing to block the plan despite the state’s progress in meeting its demands, and it was expected the U.S. Supreme Court would decide the plan’s fate on appeal. That may not be necessary now.

Twice now more climate-friendly presidents have won the popular vote and been stymied by the Electoral College, meaning that younger, progressive voters, who also happen to be the future of the snow sports industry, need to either move en masse to red states like Kansas, or older, regressive voters enamored of 20th-century energy and industrial technology need to think beyond their own selfish, life-in-the-moment agenda and think about what kind of world they’re leaving for their grandchildren.

I’ll certainly think about it next time I’m flying on a helicopter for untracked powder turns.

Gorsuch may want to stay together with his family blissfully skiing into the increasingly warm and toasty future, but his decisions on the Supreme Court will likely help seal the demise of the Colorado ski industry over the next 50 years.