Funding mental health services won’t end all gun violence, but it will save lives 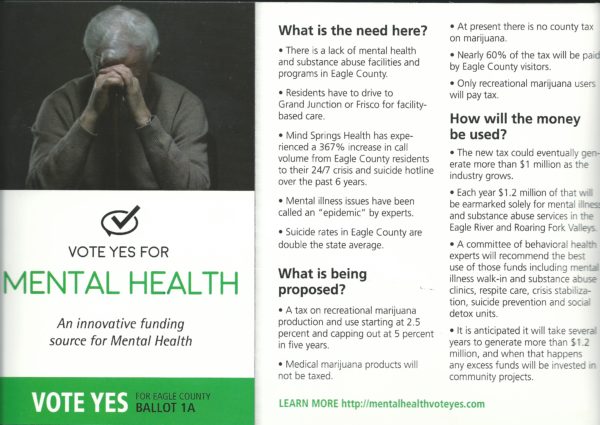 Andrew Romanoff, who as the president and CEO of Mental Health Colorado wholeheartedly supports Eagle County Ballot Issue 1A, wanted to make sure during a recent interview that I was very clear on one thing: adequately funding badly needed mental health services locally and across Colorado doesn’t mean we’ll see an end to our current gun-violence epidemic. 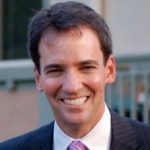 “We want to make sure that people understand that most people with mental illness don’t commit crimes,” Romanoff told me. “They’re more likely to be victims than perpetrators. I don’t want to leave folks with the impression that if you’re mental illness goes untreated, you’re going to open fire in a crowded theater or a concert or engage in some killing spree.”

With the worst mass shooting in U.S. history so fresh in everyone’s minds – 58 killed and more than 500 wounded at a country music festival in Las Vegas on Oct. 1 – Romanoff says funding for mental health and substance abuse services, however, is a matter of life and death.

“[Mass shootings] are horrible but not representative,” Romanoff said. “I don’t want people to think if we just treat [mental health issues], we can free the nation from this series of mass shootings. Mental health care is important for a lot of reasons, but it might not have stopped [Vegas shooter Stephen] Paddock or some of these other killers.”

Most gun deaths in the United States (about two-thirds of the annual average of around 33,000) are suicides, and it’s typically the most lethal way to end one’s own life. That was the case with Romanoff’s cousin Melissa, who shot herself to death in the backyard at a family New Year’s Day celebration in 2015.

Romanoff wants communities across Colorado to figure out funding mechanisms for bringing badly needed mental health services to underserved areas like Eagle County, where so far this year there have been 10 suicides – already more than all of last year. And yet there are no in-patient mental health beds for a county of more than 53,000 people.

And while even the peaceful resort town of Vail has its own example of a mass shooting perpetrated by a mentally ill man (Richard “Rossi” Moreau at the Sandbar restaurant in 2009), Romanoff doesn’t want mental health funding entangled with the gun control debate. Nor does the former Democratic speaker of the house of the Colorado Legislature want Republicans to think the epidemic of mass shootings can be solved solely by funding mental health services.

“We’re glad to have [Republican] support for mental health care,” Romanoff said. “We need every party to sign on because this is not a partisan issue. Everybody could be doing more on this issue. That’s our pitch.”

Last spring a student left notes threatening violence and suicide at Battle Mountain High School in Edwards. Thankfully, the threats never materialized, either because of the ensuing law enforcement presence that cast a pall over end-of-the-year and graduation festivities or because the student was identified and kept from acting on what was clearly a desperate cry for help. 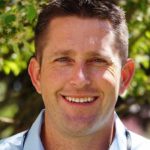 I have two sons at Battle Mountain, but I have no idea what the resolution was. While bag check and other security measures were communicated quite well in the days leading up to the specific date detailed in the notes, I always felt there was not nearly enough emphasis on counseling.

Not just for the student who made the threats, but for other students and parents who were impacted by the very real possibility of a Columbine-style school massacre right here in our formerly and obviously quite fictitiously safe and serene mountain-resort valley.

This school year started with absolutely no mention of last spring’s troubling incident – no update on how or if it was resolved – and no more write-ups in the local paper of record, the Vail Daily. They did a great story on teen suicide prevention in July, using the Netflix series “13 Reasons Why” as a news hook, but even that article failed to mention last spring’s threats.

I’m bringing all of this up again not just to criticize the lack of communication and open dialogue on mental health issues but also to underscore the stigma attached to such issues, especially in a resort area dependent on tourism and adverse to big-city, bad-news stories.

I also believe it’s perhaps the best reason yet to vote for Eagle County Ballot Issue 1A to tax recreational marijuana sales and fund local mental health and substance abuse services – and a reason no one is really talking about. There have been 10 suicides in Eagle County so far this year, but there could have been an 11th.

And it might have been the most tragic of all, because our valley’s youth – in my opinion – is not getting nearly enough help coping with all the stress of adolescence. We have an intense party culture in the Vail Valley, and parents are stretched very thin dealing with a lack of affordable housing, skyrocketing health insurance costs and one of the state’s highest costs of living.

I interviewed several experts on these factors in articles I wrote on 1A for both Colorado Politics and Atlantic Media’s RouteFifty.com, and they all shared invaluable insights into why we should care about the fact that we have zero in-patient beds for people in need of mental health and substance abuse services – requiring transport to Grand Junction, Denver or  Pueblo.

Eagle County Public Health and Environment director Chris Lindley is an Iraq War combat vet who “saw some terrible things” that deeply impacted soldiers returning to the states. He’s good at recognizing people on the verge of snapping, and he has some tips on talking about and recognizing mental illness.

“How do you know when things are starting to spin out of control? What are the early warning signs?” Lindley asks. “I think it all comes down to social connectiveness, and if we are connected to each other – not on Facebook and social media – but connected as humans, and we check in on our neighbor and we see people in the local coffee shops and we say hi, as humans we immediately pick up on people in distress.”

So sweeping an incident like what happened at Battle Mountain last spring under the rug isn’t necessarily the right move.

“We miss so many of those signs because we’re scared to have that conversation in this country,” Lindley added.

If you need more recent reminders, there was a “subject in crisis” incident at a home in Eagle Ranch earlier this month, and a Gypsum woman hung herself in the Garfield County Jail just a couple of weeks ago. Could these folks get help right here locally and hopefully head off trouble before police or the coroner are involved? We won’t know until we fund some local beds.

The 1A tax, which is only on recreational marijuana sales and starts at 2.5 percent and caps out at 5 percent, would fund social detox with six beds, a crisis stabilization unit with six beds, a mental health walk-in clinic and other behavioral health services the community needs. It would raise up to $1.2 million a year and does not go toward an actual facility. The county is in talks with local health care providers about a capital campaign to pay for a building in Edwards.

The only real criticisms I’ve heard so far against the tax is that it unfairly singles out marijuana buyers and picks on a product that is already heavily taxed. But when I voted for legalization back in 2012, capturing that tax revenue was one of my biggest motivations.

Don’t kid yourself into thinking no one was smoking pot prior to the 2012 vote. It was just all black market and untaxed. I’ve written extensively about how to deal with the unintended consequences of legalized marijuana, and the horse is out of the barn when it comes to the sale and taxation of pot. We ought to direct those funds to something as meaningful as mental health.

Even if U.S. Attorney General Jeff Sessions aggressively starts cracking down on states that have legalized marijuana, it seems unlikely his administration will outlast the court challenges that would ensure. The genie is out of the bottle when it comes to legalized pot.

I’ve also read that our local hospital should exclusively shoulder the financial burden of funding mental health services, and I don’t disagree that Vail Health should be heavily involved. But my understanding is that that the local nonprofit not only endorses 1A but is also deeply involved in discussions about building a comprehensive facility in conjunction with Mountain Family Health Centers. The building would also serve to expand our federally qualified low-income health clinic that’s bursting at the seams in its current location in Edwards.

So please vote yes on 1A, take advantage of free mental health training sessions through Eagle County and Mind Springs Health (email Lindley at chris.lindley@eaglecounty.us), and reach out to these free, local 24/7 crisis services if you need to talk to someone:

We are all literally in this together, and we need to talk openly and connect as much as we can about mental health and substance abuse issues impacting so many of us here in the Vail Valley.