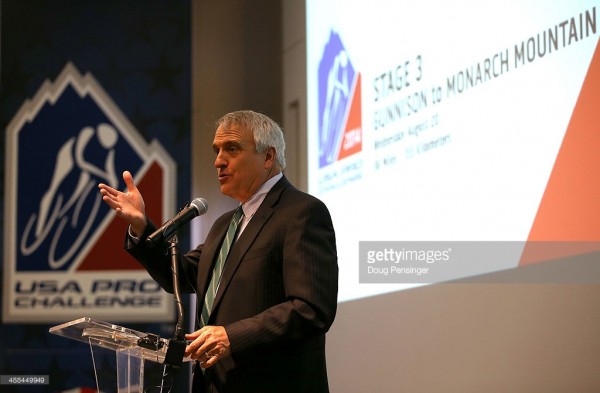 Former Gov. Bill Ritter was a big backer of the USA Pro Challenge cycling race, which will take 2016 off.

An avid cyclist, former Colorado Gov. Bill Ritter remains hopeful that the USA Pro Challenge cycling race he pushed hard for during his one term in office will return to the state in 2017 after a one-year hiatus in 2016.

“There are a lot of people who are very interested in finding a way for that race to reappear,” Ritter recently told RealVail.com. “The beauty of that race had a lot to do with the geography of Colorado and what a bike-friendly state we are. Those two things haven’t changed.”

The USA Pro Challenge, which Ritter teamed up with Lance Armstrong to stump for starting in 2009, ran for five years starting in 2011 but lost its founding funders when the Schaden family of Quiznos sandwich shop famed pulled out in the fall of 2015.

Current Gov. John Hickenlooper pulled together a team that included sporting-goods icon Ken Gart as bike czar to find new funders and sponsors and keep the stage race on track for this year, but organizers announced a one-year hiatus in February.

“The timing and work involved in this endeavor does not allow us to produce the event in 2016 and achieve all the goals of our important stakeholders,” a statement from organizers read at the time. “Instead, we have targeted 2017 to restart this iconic race.”

In five years the USA Pro Challenge established a reputation as one of the most grueling cycling races in the world, with daunting stages traversing some of the highest terrain in the state, including Vail Pass, Independence Pass and a stage that ended at Beaver Creek ski area.

It also drew more than a million spectators a year and was estimated to have brought $130 million in economic benefit to the state, including national television exposure.

“Finding a sponsor who’s willing to sponsor the race or finding people who are willing to back the race, that’s essential to the future,” Ritter said. “That’s the one thing that we need.”

Four of its five years the race was won by Americans, some of them modern-day U.S. legends of the sport, including Levi Leipheimer and Christian Vande Velde in the first two years. Leipheimer beat out an inaugural field that included the entire podium from that year’s Tour de France – Cadel Evans and both Schleck brothers.

Then rising young star Tejay van Garderen claimed the title the next two years. The now-established rider with ties to Boulder and Aspen recently made headlines by announcing he’ll skip this year’s Summer Olympic in Rio de Janeiro out of fears over the Zika virus.

Ritter teamed up with former seven-time Tour de France winner and part-time Aspen resident Armstrong to campaign for the race back in 2009-10, well before Armstrong admitted to doping and left the sport in disgrace – stripped of his titles and Olympic medals.

That scandal broke during the second year of the Pro Challenge in 2012 and transfixed the cycling world that August.

Ritter says he wants the race back as a showcase not only for the athletes but also for the natural wonders that make Colorado unique and a true cycling mecca.

“We certainly need to find sponsors for it, but what hasn’t changed is the geography in Colorado, the topography, and the bike-friendly nature of the people in this state,” Ritter said. “Those two things together make this a great state to still have the USA Pro Cycling Challenge.”