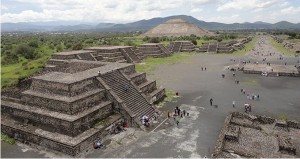 In some fundamental ways, today’s cities and yesterday’s settlements may be more alike than different. Photo courtesy University of Colorado.

Visitors to the ancient city of Teotihuacan—with its pyramidal structures arranged in careful geometric patterns, its temples, and its massive central thoroughfare, dubbed Street of the Dead—in Mexico may have the sensation they’re gazing at the remains of a society profoundly different from their own.

But new research from anthropologists armed with a bevy of recently derived mathematical equations shows that in some fundamental ways, today’s cities and ancient settlements may be more alike than different.

In a new study led by a University of Colorado Boulder researcher and published in the journal PLOS ONE, scientists show that the same equations used to describe patterns of development in modern urban areas appear to work equally well to describe ancient settlements, settled thousands of years ago.

“This study suggests that there is a level at which every human society is actually very similar,” said lead author Scott Ortman, assistant professor of anthropology at CU-Boulder. “This awareness helps break down the barriers between the past and present and allows us to view contemporary cities as lying on a continuum of all human settlements in time and place.”

Over the last several years, Ortman’s colleagues at the Santa Fe Institute (SFI), including Professor Luis Bettencourt, a co-author of the study, have developed mathematical models that describe how modern cities change as their populations grow. For example, scientists know that as a population increases, its settlement area becomes denser, while infrastructure needs per capita decrease and economic production per capita rises.

Ortman noticed that the variables used in these equations, such as cost of moving around, the size of the settled area, the population, and the benefits of people interacting, did not depend on any particular modern technology.