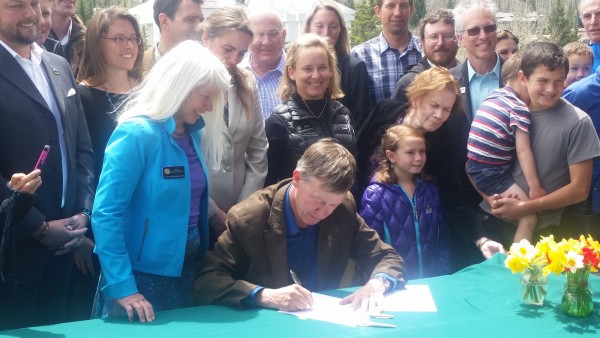 Conservation and outdoor industry groups around the state and the country are praising the new, first-in-the-nation Colorado Public Lands Day after Gov. John Hickenlooper signed it into law last week in Vail, simultaneously addressing several other hot topics related to federal lands and the November election.

Hickenlooper on Tuesday, in an exclusive interview with RockyMountainPost.com, discussed his aspirations for higher office should Hillary Clinton be elected to the White House in November, and he also talked candidly about some sort of compromise that may be possible on reclassifying hospital provider fees – and whether that would necessitate a special legislative session.

Hickenlooper was in Vail to sign a Colorado Public Lands Day bill, sponsored by Democratic state Sen. Kerry Donovan, a former Vail Town Council member and lifelong Vail resident. The current council, including Vail Mayor Dave Chapin, attended the bill-signing ceremony at the base of Vail Mountain that creates a state holiday the third Saturday in May.

“Since taking office in 2011, the governor and his team have endeavored to make Colorado the most pro-business state with the highest environmental and ethical standards,” Chapin said in his introductory remarks. Donovan then spoke to the clearly partisan crowd, joking that Hickenlooper could have some of her mom’s cookies if he signed the bill. Donovan’s mother, Diana, was a longtime Vail Town Council member and apparently talented baker.

“This will take the third Saturday in May and establish it as Colorado Public Lands Day, and this is the first one in the nation,” Kerry Donovan said. “We’ll be the first state to step forward and say, ‘public lands are critical to the identity of our state, not only to our quality of life but also to our economies,’ and I’m really proud that are our state is going to be a leader across the nation.”

Donovan went on to thank a wide range of groups that backed the bill, including Conservation Colorado and the town of Vail, which sent a resolution of support to the State Legislature. She also thanked Vail Resorts, a publicly traded company that rarely takes political positions.

“Vail Resorts, you’re not only going to be the backdrop for the bill signing, you’ve been a great partner for this,” Donovan said. “I really appreciate you guys lending your voice to this. It’s not something you always do, and it meant a huge amount to me to have Vail Resorts as a partner on this, and you guys are a showcase for what happens on our public lands.”

Doug Lovell, chief operating officer of Beaver Creek, discussed the importance of Vail Resorts’ public-private partnership with the U.S. Forest Service and the fact that the entire ski industry brings about $5 billion in economic activity into Colorado.

“It was important for us to support having a public lands day in Colorado because it really highlights the importance of our public lands,” Lovell said. “For us that means really recognizing the … recreational opportunities that we have on our public lands, but also the economic impact that it has on our communities and the whole state.”

Diane Mitsch Bush, a Steamboat Spring Democrat who was the co-prime sponsor of the bill in the state House, was clearly pumped that the bill, despite Republican opposition, made it to Hickenlooper’s desk for his ultimate signature into law. Mitsch Bush represents both Routt and Eagle counties in the legislature and faces a re-election battle against Republican businessman Michael Cacioppo of Vail in November.

“Our counties obviously rely on public lands for a whole host of things – our quality of life, our soul, our public lands are magnificent, and of course our economy,” Mitsch Bush said. “Our economies absolutely depend on our public lands, but it’s not just our ski counties, but our whole state. I’m psyched about this.”

“Our public lands are integral to the Colorado brand and our way of life,” said Scott Braden, Wilderness and Public Lands Advocate at Conservation Colorado. “Our parks, monuments, forests, and other lands provide a competitive advantage to the communities and business who have made Colorado home. We’re proud to lead the nation by being the first state to establish a holiday celebrating our public lands.”

Here’s the full press release from Volunteers for Outdoor Colorado:

Denver, Colo., May 24, 2016 – Memorial Day weekend is just around the corner, and as the unofficial kick-off to summer, many Americans will begin vacation adventures that will take them to our nation’s spectacular public lands. In perfect timing, Colorado Gov. John Hickenlooper signed a bill this month that establishes a new state holiday to commemorate Colorado’s federal, state, and local public lands. Starting in 2017, the third Saturday in May will be Colorado Public Lands Day.

To celebrate the new bill that is vital to Colorado’s way of life and businesses, the statewide nonprofit organization Volunteers for Outdoor Colorado (VOC) encourages everyone to partake in one of its many volunteer opportunities throughout the state to help keep Colorado’s public lands healthy and thriving. VOC offers opportunities for all ages, skills, and interests. Activities range from planting trees and gardens, to removing invasive plants and revegetating fire-scarred land, to building trails and restoring wildlife habitat.

“Here at VOC, we are deeply proud and pleased that Colorado is leading the nation in establishing a Public Lands Day, acknowledging just how valuable our public lands are,” said Ann Baker Easley, VOC’s executive director. “It represents our desire to protect the irreplaceable areas where we hike, fish, explore, camp, climb, bike, paddle, and just relax. People travel to Colorado from around the world to recreate at our natural treasures, and it’s so important that we care for them so they are here for future generations.”

It is VOC’s hope that the passage of this bill will also spark constructive conversations about responsible management of Colorado’s public lands.

“Public lands mean we, the public, have a responsibility to protect and preserve these lands,” said Baker Easley. Bipartisan support for Public Lands Day – especially at a time when politics often cause much division and strife – is a superb indication of the passion Coloradans have for outdoor recreation on public lands, as part of a fit and fulfilling lifestyle.”

Those interested in giving back to Colorado’s public places can explore and register for more than 50 volunteer opportunities via VOC’s volunteer calendar at voc.org/volunteer. Places to volunteer include Denver-area parks and open spaces, famous ‘fourteener’ trails, Wheeler Geologic Area, Red Rocks, Urad Lake which is Colorado’s newest State Wildlife Area, Rocky Mountain National Park, the Continental Divide, and many more. VOC volunteer opportunities are open to the public, and no experience or training is necessary.