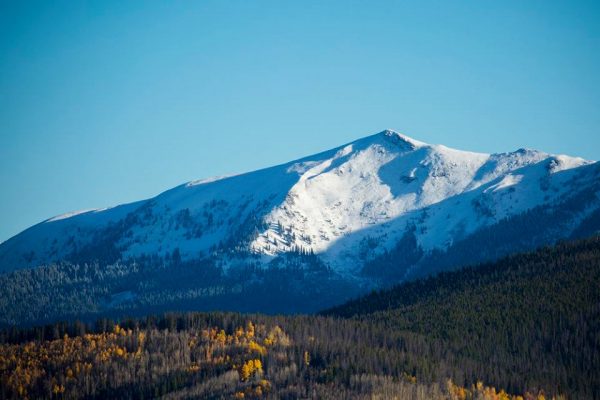 Snow on the mountains near Vail (Vail Resorts Facebook photo).

“It is a serious mistake to back out of the Paris Accord,” Democratic Gov. Hickenlooper said in a prepared statement. “This is a historic global agreement between almost every nation on earth to address the single most pressing issue facing humanity. Abandoning this climate deal is like ripping off your parachute when you should be pulling the ripcord. “

Colorado officials pointed out the state ranks among the nation’s largest clean energy employers, with 2,070 clean technology companies operating in Colorado in 2015, supporting more than 62,000 jobs in both rural and urban communities. Those jobs provide Coloradans $3.6 billion in wages.

“America’s greatness has always been demonstrated by our moral leadership,” Hickenlooper added. “Today, we break ranks with 190 nations who are working together to stop the worst effects of climate change, which the scientific community agrees would devastate the global economy and our planet, and the defense community agrees would destabilize vulnerable nations that have served as breeding grounds for international terrorism.

“The U.S. is letting go the reins of world leadership, allowing other countries like Russia, India, and China to take our seat at the international table. Our economic and technological competitiveness will suffer. Isolationism is not leadership.

“Colorado’s commitment to clean air and clean energy will continue,” Hickenlooper continued. “Clean energy is abundant, home-grown, and creates 21st century jobs for our modern workforce across every part of our state. We renew our commitment to pursue cleaner energy at a lower cost. To do otherwise would be governmental malpractice.”

U.S. Rep. Jared Polis, a Boulder Democrat whose district includes the Vail Valley, decried the economic folly of pulling out of the deal. Polis, who serves as vice-chair of the Sustainable Energy and Environment Coalition (SEEC), offered this comment Thursday:

“The President’s decision to withdraw from the Paris Agreement, the largest multi-national climate agreement in history, flies in the face of both economics and science. While 195 other nations are moving forward to create 21st century jobs, reduce carbon emissions, and advance innovative energy, the United States will now be less competitive in the global economy. We cannot afford to disregard the health and well-being of future generations and the overwhelming evidence that humans are the leading contributors to climate change,” Polis said.  “Companies, states, and local governments throughout the United States, have already begun to fill the void left by this administration’s actions, leading the way on clean energy initiatives and reducing our carbon footprint. Unlike this administration, I will continue to help find ways for Colorado and the United States to strongly address climate change and further clean energy technologies and jobs.”

“We are deeply saddened by the decision to withdraw from the Paris Agreement. As a global company, Vail Resorts believes we have a unique responsibility to protect the incredible natural landscapes and environment that surround our mountain resorts and those across our planet. Climate change is a global challenge that requires global cooperation, and it is disheartening to see the United States pull away from working with the other 194 countries that were part of the Agreement. Vail Resorts will redouble our efforts to find significant ways to minimize our carbon footprint through reducing our energy use to help address one of the most serious challenges facing our worldwide community.”

Locally, Eagle County on Thursday announced its participation in the Compact for Colorado Communities to combat climate change. Here’s the release on that effort:

May 31, 2017 – Eagle County and the towns of Avon, Eagle, Minturn and Vail were among the 27 jurisdictions from across the state that signed on to the Compact for Colorado Communities earlier this month. Founded by City of Aspen Mayor Steve Skadron, the compact was established to bring cities and counties together to take local action on climate change.

According to organizers, the goal of the Compact for Colorado Communities is to form a unified network that will:

At the kickoff event held on May 19, Commissioner Jill Ryan signed the following pledge on behalf of Eagle County: “I commit to advancing my community’s efforts to address climate change by championing our participation in the Compact of Colorado Communities. I will ask that my governing body consider the Compact’s charter by no later than September 30, 2017.”

“As local officials, we must lead by example if we expect climate change to be addressed at the state and national levels,” said Ryan. “By reducing greenhouse gas emissions in our own communities, we are taking steps to protect our environment and our economy while also modeling actions we’d like to see take place across the country.”

More information on the Compact for Colorado Communities can be found at http://Colorado.ACCOonline.org.