After cities across the United States, including Denver, set heat records in October, November has been just as balmy, prompting several ski areas in the Colorado Rockies to postpone their opening days and sparking debate over whether climate change is to blame.

“Hello, it’s November. Not a flake,” former ski resort planner and state Sen. Gail Schwartz of Crested Butte told The Rocky Mountain Post, referring to the unusually warm and dry fall in Colorado. “We’re going to have to go after more [legislatively] on climate.”

Schwartz, who was convincingly defeated by pro-coal industry U.S. Rep. Scott Tipton last week, championed a number of clean-energy bills during her eight years in the state legislature. She’s worried Donald Trump’s presidential administration will undo much of the progress made in combating climate change that she says is slowly killing the ski industry. Trump has called climate change a hoax perpetrated by the Chinese and threatened to unravel and outright rescind many federal air-quality regulations.

According to the Vail Daily, World Cup ski races scheduled for Nov 26-27 at Lake Louise, Alberta, Canada, have been canceled by the International Ski Federation (FIS) due to warm weather and a lack of snow. FIS officials will assess the Birds of Prey course at Beaver Creek on Friday, deciding whether to go forward with World Cup races scheduled there for Nov. 29 – Dec. 4. Vail Valley Foundation officials told the Vail Daily the races will go on despite conditions similar to Lake Louise. 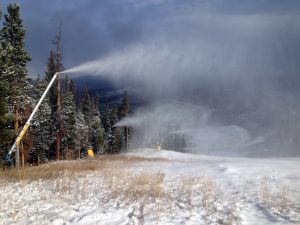 Meanwhile, the ski industry — so dependent on cold weather and abundant snow — appears conflicted on the issue politically, giving to candidates on both side of the debate. And 2016 is on track to be the hottest year in human history, shattering the record set just last year.

Ski resort officials point to dry starts to the season in recent years, followed by plenty of snowfall the rest of the season, and they’re encouraged by recent weather forecasts in Colorado. Here’s the latest information on incoming storms and ski resort opening days in Colorado:

Blast of winter heading into Colorado as Keystone, Breck, Copper set to open

True, it’s been a very slow start to the 2016-17 ski season, with several Colorado ski resorts postponing opening days, but the good news is that’s all about to change later this week, with a blast of winter rolling in Thursday — just in time for opening day at Keystone, Breckenridge and Copper Mountain.

“A cold and powerful storm will hit Colorado on Thursday, with powder skiing likely on Friday morning,” reports meteorologist Joel Gratz of Opensnow.com. “Then, after a dry weekend, one or perhaps two storms may bring snow during Thanksgiving week.”

Keystone announced last week that it will open for the season on Friday, Nov. 18, with Breckenridge now opening on Saturday, Nov. 19. Both resorts were originally scheduled to open Friday, Nov. 11.  Copper Mountain also pushed back its opening day to Friday, Nov. 18. Loveland and Arapahoe Basin are already up and running on mostly man-made snow.

Vail Mountain, originally slated to open Friday, Nov. 18, has set a new opening day of Friday, Nov. 25, and Beaver Creek is still scheduled for a Wednesday, Nov. 23 opening day. Meanwhile, other Vail Resorts mountains will be up and running this weekend.

“We’re thrilled to open for skiing and riding this Friday,” said Mike Goar, vice president and chief operating officer for Keystone Resort. “I’m incredibly proud of everything the resort teams have been able to accomplish to prepare the two mountains for our guests. We’re all ready to welcome winter.”

Breckenridge cranks up its lifts on Saturday.

“Both Breckenridge and Keystone will continue to make snow at every opportunity as weather allows in order to provide guests the best on-snow experience possible,” said John Buhler, vice president and chief operating officer for Breckenridge. “We can’t wait to greet our guests at both mountains this week and carve those first turns of the season.”

With most of November producing favorable overnight temperatures for snowmaking, the weather forecast on the horizon only gets better, according to OpenSnow.com meteorologist Sam Collentine. “On Thursday morning and into early Thursday afternoon, we will likely see the strongest cold front of the season,” he wrote on Tuesday. “Overall, expect a full return to winter on Thursday and Friday.”

That pattern is likely to continue next week.

“We’re looking forward to a shift in the weather pattern this week to assist with resort snowmaking efforts and to another great winter season ahead,” said Chris Jarnot, executive vice president and chief operating officer at Vail Mountain. “We saw a very similar start to the 2007-2008 season, and the resort went on to receive more than 100 inches of snow by Dec. 12, contributing to a well-above-average snow year.”

The season has been slow to kick off in Utah as well, with Park City Mountain officials announcing Monday that the resort’s opening day, originally planned for Friday, Nov. 18, has been rescheduled to Saturday, Nov. 26.

“Park City Mountain is dedicated to providing our guests the best early-season ski and ride experience,” Park City Mountain Chief Operating Officer Bill Rock said. “While unseasonably warm weather has not made it possible for recent snowmaking operations, our team is ready to fire up the snow guns at every opportunity as weather gets cooler. We look forward to opening as soon as we feel we can provide our guests with good quality snow conditions.”

Rock pointed out that a slow start to the ski season does not mean it will be a low snow year.

“It’s important to remember that during the 2008-09 season, Park City Mountain rescheduled opening day to after Thanksgiving and ended up with 444 inches at the Jupiter snow stake. The average at that stake is 357 inches,” Rock added.