Even after Sunday’s big win by the Broncos over the previously unbeaten Kansas City Chiefs, Denver fans should probably dial back their expectations of Peyton Manning getting to February’s Super Bowl on the frozen tundra of MetLife Stadium in East Rutherford, New Jersey.

First off, Manning’s path to his third Super Bowl is far from certain — possibly still requiring a slew of road wins as a wildcard entry – and if he gets there and takes his second title, that would almost certainly be the end of the Manning Era in Denver. It would be all Osweiler all the time. 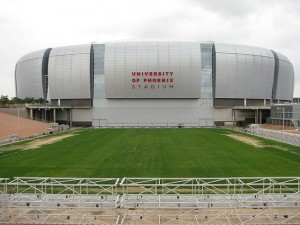 University of Phoenix Stadium, home of the Super Bowl in 2015.

Of course, if Denver claims its third Super Bowl championship, who cares if Manning rides off into the sunset, right? Wrong, as far as I’m concerned. Manning has thrown a scintillating 71 touchdown passes the last two seasons, and with 470 career TDs he’s “only” 38 behind Brett Favre (508) for the all-time record. That’s half a season the way he’s going.

But who cares about stats and records, right? It’s all about Super Bowl rings. True, but we all know how Peyton plays in ice-cold outdoor conditions, and this season’s Super Bowl will be the first contested in an outdoor stadium in a cold-weather city. That has last January’s 8-degree Baltimore Ravens debacle in Denver written all over it.

Better to play for next year when the Super Bowl will be contested in sunny suburban Glendale, Ariz., at the University of Phoenix Stadium. That modern architectural marvel with a retractable roof and roll-in natural turf field is where Peyton’s little brother, Eli, ended Brady’s bid for a perfect season in 2008. Eli then topped Brady again in 2011 to double his brother’s ring total.

Peyton will be a well-worn 38 next season, the same age as his boss, John Elway, when the Duke became the oldest Super Bowl champion in league history in 1999. A year earlier, in ’98, Elway and the Broncos wiped away the taste of a bitter home playoff defeat the season before to Jacksonville with a thrilling wildcard run and a Super Bowl win over Favre and his Packers.

So while I would gladly take a similar run to the Super Bowl this season, capped by a win over the former AFC West rival Seahawks, there are simply too many intriguing storylines to resist the return of Manning in Broncos’ orange next season.

Yes, his ankles and neck must be willing to cooperate, but Elway could barely walk his final two seasons but still had enough in his arm to win the MVP against the Atlanta Falcons in ’99. I’ve already argued Peyton needs at least one more ring to be considered the greatest of all-time, but knocking Favre out of the top spot in all the major passing categories wouldn’t hurt either.

Right now my top five all-time QB list goes like this (based purely on championships and playoff wins): Bart Starr (7 championships, including the first two Super Bowls), Joe Montana (4), Terry Bradshaw (4), Brady (3) and Troy Aikman (3). Peyton maybe cracks that list with one more ring and all the career passing records.

But if he really wants to bust that list wide open, Manning needs to win it all this season in New Jersey and next season in suburban Phoenix. Then he matches Brady and Aikman, surpasses his baby brother, Eli, his boss, Elway, in Super Bowl wins and coincidentally knocks Favre from the top spot in all the record books.

I just don’t think it’s going to happen this season, because even tied in the AFC West with Kansas City at 9-1 (and holding the tiebreaker in head-to-head competition), Denver’s remaining regular-season schedule is brutal compared to the Chiefs’ and their soft schedule after finishing 2-14 last season.

The Patriots will be very tough to beat at Foxboro, and the Chiefs showed me enough in Denver to make me think they can beat the Broncos in Arrowhead. So Denver could be staring at 9-3, while the Chiefs could be 11-1 in a couple of weeks, having split with Denver.

The Broncos’ final four games are very winnable, but Kansas City only has one tough one left with the Colts coming to town, so even if Denver won out after losing their next two, they’d still only be 13-3. KC would be 14-2 even if Indy can pull out a win in Arrowhead. It’s really not looking good for Denver to defend its AFC West title.

So I’m throwing in the towel this year and hoping Manning comes back for one more season, breaks every known passing record and wins his second Super Bowl a relatively short drive from here in Arizona. That would be well worth a road trip … and a couple grand for a ticket.

3 Responses to Broncos, Manning buck Chiefs, but fans should rein in Super Bowl hopes … this season