A little more than a year after it opened, Aspen Skiing Company’s unique partnership with a Colorado coal mine, a local electric cooperative and an innovative Denver company produces as much power as the ski company uses in an entire year.

ASC recently produced a video on the 3-megawatt, coal-mine-methane power plant as part of its “Our Story” video project. The one-year anniversary also gave Rocky Mountain Post the opportunity to re-post a story on the facility from a year ago when it first started generating electricity by capturing and combusting waste methane gas emitted from Oxbow’s Elk Creek Mine near Somerset, Colo. While deemed a no-brainer by some energy analysts, others say coal-mine methane is not without controversy:

ASPEN, Colo. (Nov. 27, 2012) — Helping to develop a coal-mine methane power plant to offset the entirety of his company’s annual electrical consumption has been the highlight of his career, says Auden Schendler, vice president of sustainability at Aspen Skiing Company.

“The beauty of our organization being privately owned is I pitched this to our owners over a chicken lunch a year ago and I thought, ‘Wow, they’re going to fire me; they’re going to think I’m crazy,” Schendler said of the $6 million project dedicated earlier this month at the Elk Creek Mine near Somerset, Colo. 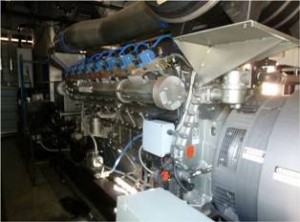 The generator at the new coal-mine methane power plant at the Elk Creek Mine near Somerset, Colo. Denver-based Vessels Coal Gas hopes this project is the “tip of the iceberg.”

“I’m a ski resort guy, and I’m going to propose a coal-mine methane project? Well, [the Crowns] knew what I was talking about because they’re industry-based people, and they said, ‘Do it.’”

The Crown family, whose fortune stems from defense contractor General Dynamics and many other industrial endeavors, chipped in $5.5 million for the groundbreaking project being billed by Aspen Skiing as a “Clean Energy Revolution.”

The Crowns are partnered at the mine with Florida billionaire Bill Koch, whose Oxbow Carbon energy holding company owns both the coal company, Oxbow Mining, and the natural gas company, Gunnison Energy, that were key to making the 3-megawatt power project happen.

Koch, who owns a home in Aspen and an entire replica Old West town on his ranch near the mine, was a big backer of Mitt Romney is the presidential election. Jim Crown, who’s hosted Michelle Obama at his Aspen home, chaired Barack Obama’s Illinois fundraising campaign in 2008. Both companies hope to reap positive publicity for the coal-mine methane project.

“We put a lot of money into it, and I told Bill Koch this, ‘If Oxbow Mining doesn’t get anything but some PR out of this, it may be worth it to me,’” said Jim Cooper, president of the Elk Creek Mine. “We took something that has very negative public views to it and now it’s something that’s useable.”

Coal-mine methane (CMM) is basically natural gas that has to be vented from underground coal mines for safety reasons. The U.S. Environmental Protection Agency (EPA) says methane is up to 23 times more potent as a planet-warming greenhouse gas (GHS) than carbon dioxide (CO2).

The brainchild of Tom Vessels of Denver-based Vessels Coal Gas, the new power project captures the methane coming out of the mine, cleans it and pumps into a generator that will produce 24 million kilowatt hours of electricity a year, or enough to power all of the buildings, chairlifts and other facilities at Aspen’s four ski areas while eliminating an estimated 96,000 tons of CO2 equivalent a year.

Aspen isn’t claiming direct use of the electricity because on paper it passes through four other power providers before finally winding up with the local rural electric cooperative, Holy Cross Energy in Glenwood Springs. Holy Cross officials wouldn’t say how much, but the coop was willing to pay more per kilowatt hour for electricity that’s far cleaner than burning coal for power.

“I really do not believe in manmade climate change because I believe man is giving himself too damn much credit,” Cooper said. “I’m thankful every morning that I walk out on my porch in [nearby] Paonia that I’m not faced with a saber-toothed tiger.”

Even environmentalists question the claims being made by Aspen Skiing Company.

“Coal mine methane isn’t clean energy and it’s disappointing to see Aspen SkiCo hype up this latest project as part of a ‘Clean Energy Revolution,’” said Jeremy Nichols, climate and energy program director for WildEarth Guardians in Denver. “That’s not to say that this isn’t a good project — it is, and it needs to happen — but it’s making the best out of the destructive impacts of coal mining.”

Acknowledging the massive carbon footprint of his luxury resorts, Schendler has been a tireless advocate for reducing greenhouse gas emissions and purchasing and producing clean energy.

“The idea is, look, it’s going to be really hard to solve climate change by going after CO2. That’s a long-term, difficult fix,” Schendler said. “But actually, you can address short-term climate issues like methane in a way that benefits public health and makes money.”

Vessels, whose company put $500,000 into the project, says coal mines and utilities in Colorado need more incentives to productively convert vented methane into electricity. By law, publicly owned utilities in the state must get 30 percent of their power from renewable sources by 2020. Rural electric associations (REAs) only need to hit a 10-percent threshold by 2020.

Vessels helped craft a bill in the state legislature this year that would have made coal-mine methane an eligible resource under the state’s renewable portfolio standard (RPS). The bill was opposed by environmentalists and backers of the state’s wind and solar industries and ultimately failed.

“So we’ve got a gap here in policy and business structure, and we’ve got a wasting resource that’s just going up in the air,” said Vessels, who adds that China, Australia and some countries in Europe are way ahead on CMM. “It’s kind of like driving down the highway and throwing money out the window and we’re not doing anything about it. Hopefully, our project is the tip of the iceberg that will start kicking things off to where this resource is being developed.”

Nichols said the problem with the CMM bill during the last legislative session was that it lumped methane in with other truly renewable forms of clean energy.

“To put it bluntly, calling coal-mine methane a renewable energy resource is like calling poop a delicious meal,” said Nichols, who has been pushing for the federal government to mandate methane capture for coal mines on federal lands. Until this project, coal companies, including Oxbow, have been very resistant to the idea.

Gail Schwartz, a Democratic state senator from Snowmass who sponsored the bill, says she’ll take another shot in next year’s session.

“The renewable portfolio standard doesn’t encourage an aggressive program for mitigating greenhouse gases,” Schwartz said. “So this bill made [CMM] an eligible resource, and three megawatts of methane did more for climate than 800 megawatts of solar.”

Schwartz, one of the legislature’s leading clean-energy advocates, had the support of one of the state’s most conservative Republicans, state Rep. Randy Baumgardner, who sponsored the bill in the House because he viewed the venting of methane as wasteful. Schwartz says the issue pits the interests of the state’s Western Slope against the more populous and windy Front Range.

“What we have [on the Western Slope] is dying trees, a lack of snowpack, a struggling ski industry, and we really need to address our own issues and utilize our own resources,” Schwartz said. “That’s why I’m very committed to a broader look that will really serve all of Colorado, not just the priorities of the Front Range. We don’t have big wind.”

Other environmental groups echo Nichols’ distaste for wasting methane but question including it as an eligible resource in the RPS.

“We are more than willing to support efforts to capture methane gas, just not at the cost of redefining what is or is not a renewable resource,” said Jason Bane, a spokesman for  the Boulder-based environmental group Western Resource Advocates (pdf).

Vessels says that misses the big-picture goal of the RPS, which is to incentivize clean energy in order to reduce the GHG emissions of fossil fuels such as natural gas (4 cents a kilowatt hour). Without a market, however, Vessels says utilities won’t buy any more expensive electricity from sources like wind (9 cents a kilowatt hour) than they absolutely have to. He says the price of power produced by his CMM project falls somewhere between natural gas and wind.